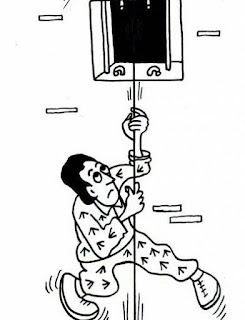 Did you see the story about the woman who was arrested for helping two convicted killers escape from a New York prison by providing them with hacksaw blades and eyeglasses with lights attached to them? It reminded me of the time James Means escaped from the Clinton County Jail at Albany, Kentucky. It happened on April 9, 1954. Means, who was being held on default of an $8,000 bond, was being held in a cell on the second floor. He sawed through the latch on his cell door, came out, removed some bricks from the back wall and, using a rope made of blankets, dropped to the ground below. Just hours earlier, jail officials, confiscated two saws, 56 saw blades, a brace and bits, a screwdriver, oil, putty, a rope and other tools from Means' cell, but didn't do anything about it. They failed to notice that he had been sawing on the latch and had camouflaged it with putty. 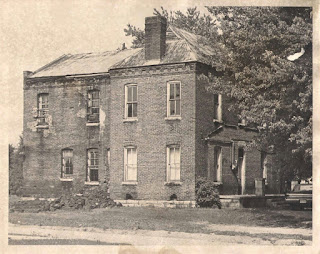 The jail Means escaped from at Albany.