The World Without Walter


The passing of longtime CBS news anchor Walter Cronkite is a sad affair for me. My growing up years incuded sitting down in front of the television every late afternoon at 5:30 to watch Mr. Cronkite deliver the news. No one else could do that like he could. He was the best. More than that, he was the standard and everyone who came after him learned from him.

In my house, most times supper was prepared prior to the CBS evening news so everyone could watch it. So many times, I have sat in front of the TV with my plate on a tv tray so I could watch him.

I clung to every word. I believed every word. If Mr. Cronkite said it, then it was the truth. I think most people felt that way. I was too young to remember his infamous President Kennedy assassination newscasts, but I remember keeping up with the vietnam war through him.

One of Mr. Cronkite's trademarks was ending the CBS Evening News with the phrase "...And that's the way it is," followed by the date. I can remember during the Iranian hostage crisis, how he altered his closing so that we would be constantly reminded how long the hostages had been held captive. He began on day 50 and he stopped with the crisis ended on day 444. It was very dramatic.

As most of you know, while I have never read the news on television, I grew up reading it on the radio. So, for me it was like I was the student and he was the teacher. I paid attention to his delivery. I think that's what I admired most about him.

"This is my last broadcast as the anchorman of The CBS Evening News. For me, it's a moment for which I long have planned, but which, nevertheless, comes with some sadness. For almost two decades, after all, we've been meeting like this in the evenings, and I'll miss that. But those who have made anything of this departure, I'm afraid have made too much. This is but a transition, a passing of the baton. A great broadcaster and gentleman, Doug Edwards, preceded me in this job, and another, Dan Rather, will follow. And anyway, the person who sits here is but the most conspicuous member of a superb team of journalists; writers, reporters, editors, producers, and none of that will change. Furthermore, I'm not even going away! I'll be back from time to time with special news reports and documentaries, and, beginning in June, every week, with our science program, Universe. Old anchormen, you see, don't fade away; they just keep coming back for more. And that's the way it is: Friday, March 6, 1981. I'll be away on assignment, and Dan Rather will be sitting in here for the next few years. Good night."

I agree with what George Clooney said. "I hate the world without Walter Cronkite." 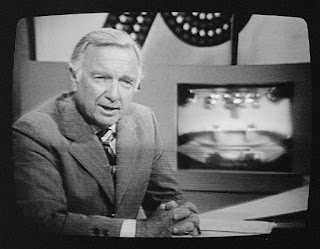