A View From Arlington


Eight months before President John F. Kennedy was assinated he made a visit to Arlington National Cemetery. It is said that he passed beyond the soldiers' graves and walked to the top of a hill. The story goes that as he paused there reflecting on the beauty of the area, he was quoted as saying, "I could stay here forever."

Senator Ted Kennedy was buried on that famous hill today, joining the other members from his storied clan.

At the site of the eternal flame rest four Kennedy family members: the former president and his wife; their baby son, Patrick, who died after two days; and a stillborn child. Robert Kennedy's grave is a short distance away.

His family said Senator Kennedy spent more days than most at Arlington visiting the graves of his beloved brothers. 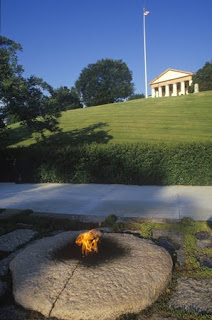