Remembering The Life Of Mark Twain 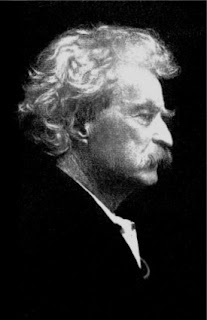 Mark Twain died in Redding, Connecticut one hundred years ago this April 21. He was 74, and in failing health, his heart — his tobacco heart, he called it — so weak that he interrupted a restful cruise to Bermuda to return and die at the house on a hill built for him just two years earlier.

"Mark Twain is dead!" cried The San Francisco Examiner. In those four words America announces to a weeping world the loss of her foremost literary man.

It had been a quarter of a century since Twain's classic "The Adventures of Huckleberry Finn," but Twain remained the country's most famous and beloved writer, the slouching, white-suited, frizzy-haired humorist and storyteller. The records of Twain's final days were in bold headlines, with Twain's doctor providing updates carried by news outlets around the world.  "Yesterday was a bad day for the little knot of anxious watchers at the bedside," The Associated Press reported just before his death, adding that health concerns had led Twain to cut his smoking from 20 cigars a day to four.  No deprivation was a greater sorrow to him. He tried to smoke on the steamer while returning from Bermuda, and only gave it up because he was too feeble to draw on his pipe. Even on his deathbed, when he had passed the point of speech and it was no longer certain that his ideas were lucid, he would make the motion of waving a cigar, and, smiling, would expel empty air from under the mustache still stained with smoke.


Twain had suffered a decade of trials. He lost his beloved wife, Olivia, and two of his children, a tragedy that led Twain to vow he would never write again. Bad investments had forced him out of his eccentric Victorian mansion in Hartford and brought him to Redding, where he lived in a Tuscan-style house he named Stormfield, in part for his story "Extract from Captain Stormfield's Visit to Heaven."

Mark Twain, the pen name Samuel Langhorne Clemens concocted for himself, was a serious man who couldn't help but make folks laugh. He told wild tales, wrote merciless parodies and made poetry out of his rustic youth. When he was near death, he became obsessed with Shakespeare and the latest theories over whether the Bard even existed, and tickled that so little was known about the life of a writer he acknowledged as his superior.  "When Shakespeare died in Stratford it was not an event," Twain wrote. "It made no more stir in England than the death of any other forgotten theater-actor would have made. Nobody came down from London; there were no lamenting poems, no eulogies, no national tears, there was merely silence, and nothing more.  A distinguished man should be as particular about his last words as he is about his last breath," he noted. "He should write them out on a slip of paper and take the judgment of his friends on them. He should never leave such a thing to the last hour of his life, and trust to an intellectual spurt at the last moment to enable him to say something smart with his latest gasp and launch into eternity with grandeur."  Twain's final words were brief, abbreviated, unwritten, uncertain. Laying in his death bed, he indicated a couple of unfinished manuscripts and whispered the words, "Throw away." Hours later, he held the hand of his remaining child, Clare, told her goodbye, and added, apparently, "If we meet ..."  What remained was a "fluttering sigh, and the breath that had been unceasing through seventy-four tumultuous years had stopped forever.

Samuel Langhorne Clemens’ parents lived and owned a vast amount of property in this area shortly before his birth. Just before 1825, John Marshall Clemens and his new wife, Jane, settled at Gainesboro, Tennessee. By 1827, the Clemens' had moved to a brand new settlement known as Jamestown, where John practiced law and was elected circuit court clerk.  John Clemens practiced law in Fentress County.  He also owned a general merchandise store. Soon after the birth daughter Margaret, the Clemens' moved to Pall Mall, where John was the Postmaster. Then, in early spring of 1835 the Clemens family moved west to be near Jane's sister in the new and more promising land in Florida, Missouri.  It was there that America's most famous author, Samuel Langhorne Clemens, better known as Mark Twain, was born.  John and Jane Clemens were still residing in Fentress County only five months and twelve days prior to the birth of  Samuel, so obviously Mark Twain was conceived in Fentress County.

In Mark Twain’s autobiography, he says "The vast plot of Tennessee was held by my father twenty years in tact. When he died in 1847, we began to manage it ourselves. Forty years after, we had managed it all away except 10,000 acres and got nothing to remember the sale by. About 1887, the 10,000 acres went. My brother found a chance to trade it for $250.00."

Today in Jamestown, there is a Mark Twain inn and restaurant, a Mark Twain post of the American Legion, and the old spring near the courthouse square where John Clemens got his water, and the log cabin where he lived, is preserved as Mark Twain Park.

By the way, did you know that Halley’s comet was visible from earth in the year Mark Twain was born - 1835?  That same comet was again visible the year he died in 1910.


*Part of this story was taken from an article written by Associated Press national writer, Hillel Italie.
at April 16, 2010