These Are The Times That Try Men's Souls 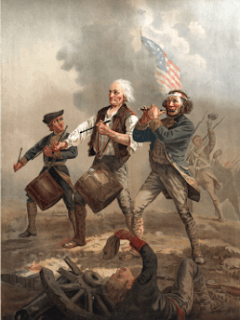 Author Thomas Paine was the first person to publicly advocate that America should seek to be an independent nation, free from tyranny.  His ‘how to’ pamphlet, known as Common Sense, sold 100,000 copies, a best-seller among the two-million people in the American British colonies. It challenged the authority of the royal monarchy and inspired the people of America into a revolution.

While the people in the American British colonies were fed up with King George, Paine wrote: “But where, say some, is the king of America?  I’ll tell you Friend, he reigns above...

...yet that we may not appear to be defective even in earthly honors, let a day be solemnly set apart for proclaiming the charter; let it be brought forth placed on the divine law, the word of God; let a crown be placed thereon, by which the world may know, that so far as we approve of monarchy, that in America the law is king. For as in absolute governments the king is law, so in free countries the law ought to be king; and there ought to be no other.”

“These are the times that try men’s souls,” said Paine in The Crisis. “Tyranny, like hell, is not easily conquered, yet we have this consolation with us, that the harder the conflict, the more glorious the triumph. What we obtain too cheap, we esteem too lightly; it is dearness only that gives every thing its value. Heaven knows how to put a proper price upon its goods; and it would be strange indeed if so celestial an article as freedom should not be highly rated.”

Paine became known as 'Father of the American Revolution.'

AND INDEPENDENCE DAY WAS BORN!

On July 4, 1981, President Ronald Reagan wrote, “Let the Fourth of July always be a reminder that here in this land, for the first time, it was decided that man is born with certain God-given rights; that government is only a convenience created and managed by the people, with no powers of its own except those voluntarily granted to it by the people.”