One Joyous Day of Prayer and Thanksgiving Long Ago 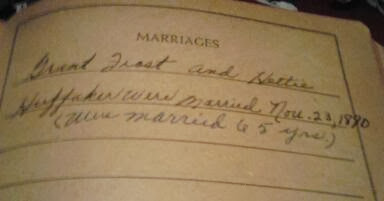 We know the first Thanksgiving was celebrated by the pilgrims in 1621, but it didn't become an official federal holiday until in 1863, when, during the Civil War, President Abraham Lincoln proclaimed a national day of "Thanksgiving and Praise to our beneficent Father who dwelleth in the Heavens."

Both my great-grandparents, Grant and Hettie Frost, were born soon after the civil war; Grant in 1867 and Hettie in 1870, and they were married four days before Thanksgiving Day in 1890 at Windy, Kentucky.

In his proclamation of November 8th that year, President Benjamin Harrison proclaimed Thursday, the 27th, as the date to be observed as a day of prayer and thanksgiving, inviting the people on that day to "cease from their labors, to meet in their accustomed houses of worship, and to join in rendering gratitude and praise to our beneficent Creator for the rich blessings He has granted to us as a nation and in invoking the continuance of His protection and grace for the future."

For Grant and Hettie Frost, and their families, Thanksgiving Day of 1890 was probably the most joyous of their time spent together. I can picture all of them gathered together to celebrate this union of marriage. As the president said in his proclamation, God did indeed provide them with protection and grace during their long life together. They were married 65 years and God blessed them with many children. Ulysses Simpson "Grant" Frost was the son of Corydon and Almira Owens Frost. During the civil war, Cord was a Private in Co. H, 13th Kentucky Calvary. Hettie Huffaker was the daughter of Henry and Margaret Shearer Huffaker. All are buried at Gap Creek Church Cemetery at Windy.