The Guerrilla Hunters: Irregular Conflicts during the Civil War 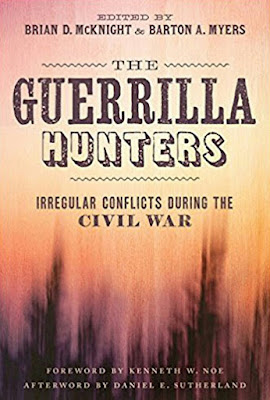 A new book was published this past April entitled, "The Guerrilla Hunters: Irregular Conflicts during the Civil War" by Brian D. McKnight, Barton A. Myers and others. The subject of the book is explained in its title.

The title of the chapter is a reference to a letter written on March 21, 1863 from Brigadier General George Crook to General James A. Garfield, Chief of Staff, Army of the Cumberland, Murfreesboro, where Crook asks the question, "Who is Tinker Dave Beaty?” (See the letter below) In the book, the authors present two reasons why men joined the independent scouts: kinship and revenge. This book is well worth reading. It is available at Amazon and Barnes & Noble.

Why would men want to join the independent scouts? David Beaty of Fentress County, Tennessee organized the unit early in 1862 in Fentress County. It was apparently never mustered into the regular U.S. Service, but Major General Ambrose E. Burnside authorized it to act as scouts, and operate in the regions of Overton and Fentress Counties in combating Confederate guerrillas. Members never drew any pay, but were supplied with arms and ammunition by the Federal authorities. It was first mentioned in the Official Records in a letter from Brigadier General George Crook, at Carthage, dated March 21, 1863, admitting his inability to establish a line of couriers due to the numerous bands of Confederate cavalry and guerrillas operating in his area. He inquired “Who is Tinker Dave Beatty?”

Confederate reports spoke of skirmishes with “Beatty’s band of robbers” and Pickett County's J. D. Hale, writing from Albany, on December 5, 1864 about the presence of “rebels” in the area, stated “Beatty knows of none in Fentress County.”

'Revenge'
Beaty, the Union guerilla, and Champ Ferguson, a Confederate guerilla, waged a bitter guerrilla warfare in the mountainous regions of the Upper Cumberland country throughout the war. Many residents, members of home guards in Clinton, Fentress and Overton counties, were murdered by guerillas on both sides. Ferguson and Beaty both claimed it was kill or be killed. Naturally, those residents that remained wanted to see the guerilla activity stopped. My maternal third great-grandfather, Elijah Koger, was one of the residents who tried to stop the guerilla warfare by arranging a peace agreement between both sides. While an agreement was reached, it was quickly broken by Ferguson. Koger's involvement in trying to bring peace to the region cost him his life, as he was murdered by Ferguson and his men at his home in the Oak Grove community of Clinton County.

'Kinship'
Tinker Dave Beaty was my maternal third great-uncle. His sister, Matilda, and her husband, John Boles, were my third great-grandparents. "The Guerrilla Hunters: Irregular Conflicts during the Civil War" mentions this and also refers to other relatives of mine who were members of the independent scouts.

My great, great-grandfather, George Boles, who after the war moved from the East Fork of Fentress County to Clinton County, was an independent scout, as was his brother, John Boles, Jr., who married his first cousin, Matilda Beaty, daughter of Tinker Dave Beaty's brother, Fleming. George and John Jr.'s sister, Mary Ann, married Thomas Allred, who was also an independent scout.

At the conclusion of the war, Ferguson was arrested for the murders of 53 people. He was found guilty and was hung on October 20, 1865.

"I am yet and will die a Rebel … I killed a good many men, of course, but I never killed a man who I did not know was seeking my life. … I had always heard that the Federals would not take me prisoner, but would shoot me down wherever they found me. That is what made me kill more than I otherwise would have done." - Champ Ferguson, after being found guilty.

Tinker Dave Beaty testified at Ferguson's trial and admitted to killing 25 people himself. But, his side won the war and he was never charged.

Gen. James A. Garfield, Chief of Staff, Army of the Cumberland, Murfreesborough:

I cannot send daily reports, as I have only a few horses, and it takes all of them to escort the mail down one day and back the next. I cannot establish a courier line unless I have cavalry to keep the enemy from coming on this of the river. The rebels taken all the horses from this section of the country, except old brood-mares, fillies, &c. Were my men mounted on these, in any movement requiring expedition, I would have to dismount and go afoot. I was never completely beat out before, but I have to acknowledge that I can do nothing against this cavalry with my infantry. I cannot entrap them in any possible way, for they have their spies and scouts all over this country, and I can make no movement without their being apprised of it before I can get to them with my infantry, and then, if it is not to their advantage to fight me, they get out of the way. They have no baggage or trains to detain them from making rapid movements.

I have seventy days' complete rations here, 150 rounds of ammunition for small-arms, and 200 rounds for battery.

I sent boat up the river yesterday, 43 miles; returned this evening, bringing some 500 bushels of corn and 600 bushels of wheat. The boats were attacked last night or this morning by several hundred cavalry. They did no damage. There are no supplies on the south side of the river amounting to anything.

Who is "Tinker Dave" Beatty?

What amount of supplies shall I accumulate here? I can get no answers to my dispatches to you. The boats leave in the morning for Nashville. 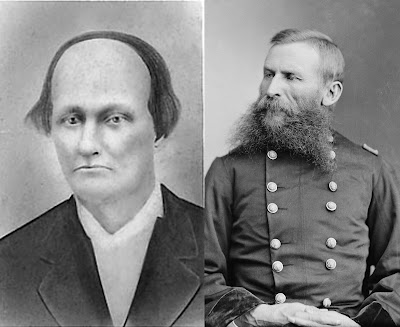