"Now the end of the commandment is charity out of a pure heart, and of a good conscience, and of faith unfeigned" - 1 Timothy 1:5

Joseph Crouch Denton died 130 years ago this year. He was the fourth pastor of Clear Fork Baptist Church in Albany, Kentucky, serving 32 years and 11 months, from October 1854 to his death on September 29, 1887.

In his obituary recorded in the Church minutes, clerk John Hopkins wrote, "The silent boatman has dipped his oars into the dark river and stealthily moored his vessel to earthly shore for a few moments and removed one of our beloved and trusted sentinels from his high place in Zion."

It was noted that the combined pastorates of Isaac and Joseph Denton of almost eighty years was attended with great blessings. Many revivals succeeded and the Church exercised a large influence. Through the Denton's, the Church received its lessons in principles of doctrines of Christ and rose to clossal proportions, exhibiting the teachings of both its pastors, especially Joseph Denton, not only in his labors in the ministry, but in his every day walk of life.

His obituary states that he "shone with intarnished luster in deeds of mercy and unselfishness among his neighbors and brethren and in his family. His feelings were as tender as a babe, yet he stood with the firmness of a granite cliff when bible principles were at issue. He planted himself only on the truth with breast bare to the storm, and amidst the tempest rose higher and shined still brighter, possessing charity and broad liberality for all."

In confusion of the Civil War, when strong men trembled with fear and all men's hearts failed them, Joseph Denton exhibited the same unfailing confidence, the same calmness, the same encouragement to all, as in time of profound peace, faithful to gently reprove the faults of a friend or to apologize for an enemy. His sweet temper possessed a magnetism to attract the attention of the disinfected and gave to him almost a resistless influence in reconciling differences between brethren or neighbors.

Joseph was a man of faith unfeigned, living a life of prayer, from hence he drew his greatest strength and influence. Clerk John Hopkins wrote, "In prayer, he seemed to obtain a neatness to the Throne, seldom given to man, then he seemed to breathe the atmosphere of Heaven and his heart to glow with a warmness of love that encircled the entire number of fallen men. In the pulpit he possessed a native elegance that entitled him to be called a "Sweet Tongued Denton." His theme was the cross of Christ, the cleansing blood of Jesus. With these, he sought to win sinners to the Saviour's love and which seldom left the hearts of his hearers unmoved."

The church record states that for a number of years, Joseph Denton was afflicted, but bore his sufferings with Christian fortitude, patiently waiting for the Redeemer to call him home. Almost at death's door, he prayed, "May the Lord bless and save you all is my prayer, amen."

Joseph Denton died without a struggle on the 29th day of September, 1887, aged 76 years, four months and 24 days. His body was buried near his parents at the Clear Fork Burying Ground, within a few steps of the church house, where he had held membership for almost 49 years, to, as the record states, "await the Resurrection morn."

There were 414 additions to the Clear Fork Baptist Church during Joseph Denton's pastorate. 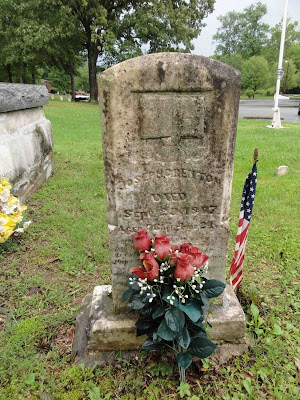