Bozo the Clown (Success In Nashville) 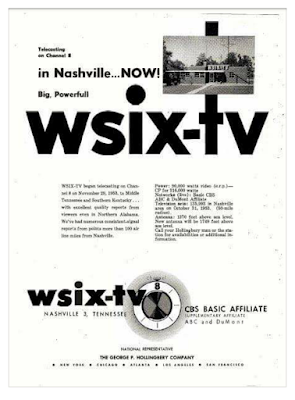 "Three Nashville Stations On Our TV!" 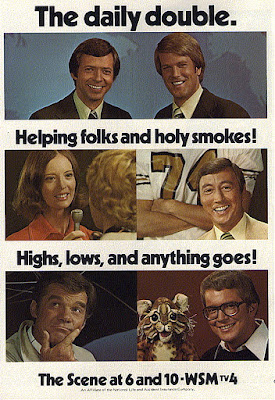 We tuned in to WSM to see if George Goldtrap would miss flipping that chalk into his pocket and to see what bizarre sports jacket Charlie MacAlexander would be wearing. We witnessed greatness when Nashville's "Mr. Television," Jud Collins read the news. One of my favorite shows was "Creature Feature," which turned film editor Russ McGowan into a cult celebrity as Sir Cecil Creape, host of late night horror movie flicks. 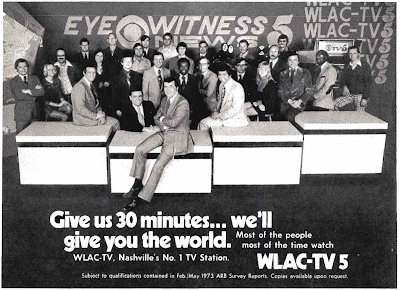 On WLAC, there was "Dialing for Dollars," "The Big Show," "The Late, Late Show" and Bob Lobertini! WSIX had the famous disc jockey Hugh Cherry, a close friend of Hank Williams, and legendary sportscaster Paul "Holy Smokes" Eells. Wheel of Fortune's Pat Sajak did the weather on Channel 4 and worked on scripts for Creature Feature, and talk show host Oprah Winfrey read the news on Channel 5, but when it was all said and done, one of the most poplar shows on Nashville TV back in the day did not include any of the popular TV personalities. That honor belonged to Bozo the Clown!

Most folks might not have realized that Bozo the Clown was a franchised character. TV stations ordered the costume, hired local talent to play Bozo and then put together their own production. Another show that had previously used this model successfully was Romper Room. During the Nashville run of Bozo the Clown, from 1956 into the late 70's, there were four different Bozo the Clowns. 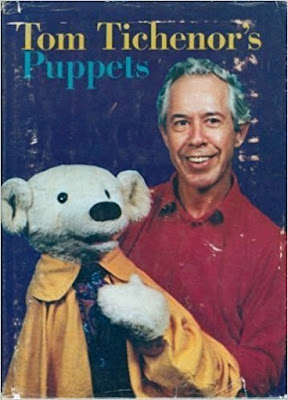 When WSM, channel 4, decided to start airing Bozo the Clown in 1956, the station hired local puppeteer, Tom Tichenor, the very first Bozo the Clown in Nashville. In the beginning, he was paid $5 for every 15-minute show. 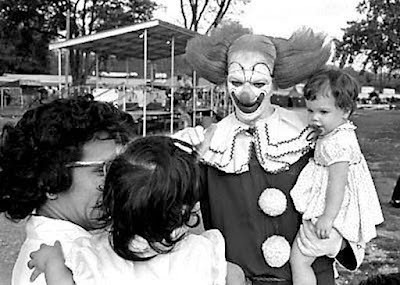 Dick Brackett
When Tichenor accepted a Broadway show opportunity in 1959, WSM prop man, Dick Brackett, became Bozo the Clown #2. During his stint as Bozo the Clown, the show changed from black and white to color and moved to a larger studio to accommodate a bigger live audience of children. The shows were broadcast live and were spontaneous or "ad-libbed." The kids were the stars of the show. During one segment, Brackett said a little girl tugged at his arm and asked, "Bozo, is there a man inside you?" The show was so popular, no fewer than 18 sponsors were crowded into an hour-long show. Cartoons were the primary feature of the show, with the ideal quota being one cartoon during every fifteen minute segment. Cartoons such as Casper the Friendly Ghost and other Paramount cartoons were dropped in wherever possible. 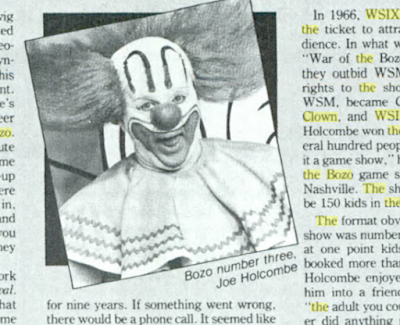 When WSM's contract with the Bozo the Clown franchise came up for renewal in 1966, competing TV station WSIX decided Bozo the Clown was their ticket to attract the after-school audience, and it worked. In what was jokingly dubbed "The War of Bozo's" by the local press, WSIX outbid WSM three to one for the rights to the show. WSIX announcer Joe Holcombe won the role of Bozo the Clown #3 after several hundred people auditioned. He turned it into the game-show format that I remember and the show went big-time, with as many as 150 kids in the studio for a single epidode. Back at WSM, Brackets altered the costume a bit, changed the clown's name to Captain Countdown and WSM began a new children's program with nearly the same format with the exception being that WSM used Warner Brothers cartoons. The show ran from 1966 to 1969 when Brackett left television to pursue other interests. Meanwhile, Bozo the Clown on WSIX quickly rose to number one in its time slot and at one point, kids in the audience were booked more than two years in advance. Holcombe played Bozo the Clown for a few years. When he left the role, he was replaced by Bozo the Clown #4, WSIX newsman Jim Kent, who portrayed Bozo the Clown for a few years until Holcombe returned. "Kent was nervous as Bozo the Clown," Holcombe said. "He smoked cigarettes while in costume. Bozo the Clown wasn't for everybody."

"A Clown Star is Born"

Just how did the Bozo the Clown get its start? In 1946, creator Alan W. Livingston and Capitol Records introduced Bozo the Clown to the world via a children’s record entitled "Bozo at the Circus." The album, which featured an illustrative read-along book set (the first of its kind), lasted for an astounding 200 weeks on Billboard’s ‘Best Selling Children’s Records’ chart, and a clown star was born. 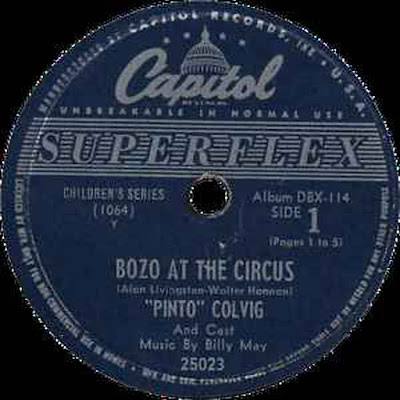 Pinto Colvig portrayed the character on this and subsequent Bozo read-along records. The albums were very popular and the character became a mascot for the record company and was later nicknamed "Bozo the Capitol Clown." Many non-Bozo Capitol children's records had a "Bozo Approved" label on the jacket. In 1948, Capitol and Livingston began setting up royalty arrangements with manufacturers and television stations for use of the Bozo character. 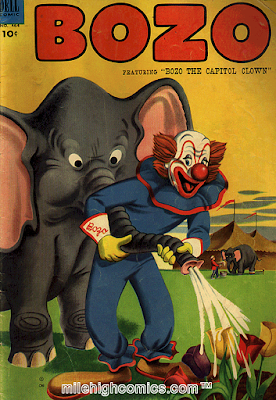 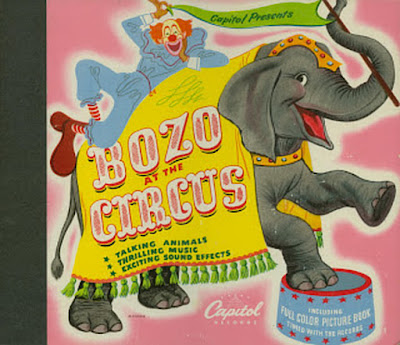 The first version of the TV show, "Bozo’s Circus," appeared on KTTV in Los Angeles in 1949 and starred Colvig. He wore white face makeup, a red nose, tufts of red hair and a blue one-piece suit on this live half-hour circus show. This version of the show aired until 1950. Capitol Records’ new TV head Elmo Williams produced 13 half-hour Bozo episodes which starred Syd Saylor as Bozo and Alan Livingston as the ringmaster. 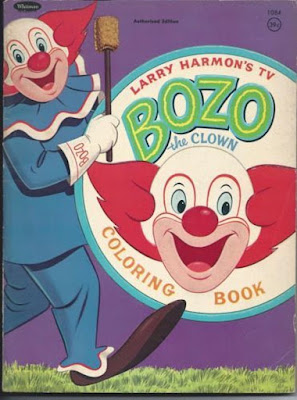 In 1956, Larry Harmon, one of several actors hired by Livingston and Capitol Records to portray Bozo at promotional appearances, formed a business partnership and bought the licensing rights (excluding the record-readers) to the character, which by this time had generated record sales in excess of $20 million. 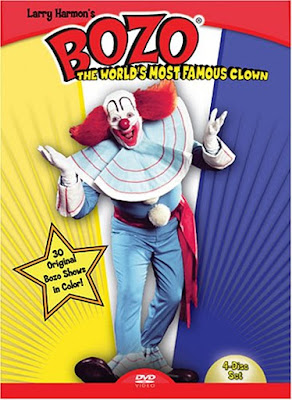 "Bozo, The World’s Most Famous Clown"

Harmon renamed the character "Bozo, The World’s Most Famous Clown." He adopted the idea of a daily half-hour show with a live Bozo, a studio audience of children, and five-minute cartoons, packaged and franchised to different markets across the US. He also modified the voice, laugh and costume. He then worked with a wig stylist to get the wing-tipped bright orange style and look of the hair that had previously appeared in Capitol's Bozo comic books.

The wigs for Bozo were originally manufactured through the Hollywood firm Emil Corsillo Inc. The headpiece was made from yak hair, which was adhered to a canvas base with a starched burlap interior foundation. The hair was first styled, formed, then sprayed with a heavy coat of lacquer to keep its form. The canvas top would slide over the actor's forehead. With the exception of the Bozo wigs for WGN-TV Chicago, the eyebrows were permanently painted on the headpiece. 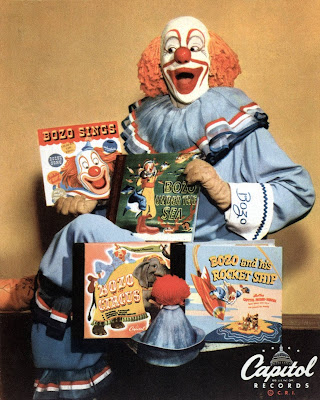 In 1959 the idea took hold, and Harmon soon had 100 Bozos across America with additional clowns in Germany, France and Japan. The new Bozos had to learn such phrases as “What are you doodly-do-doing?” and “Wowie kazowee!” By the mid 1960’s, Bozo was grossing over $150 million in merchandise worldwide.

Although Bozo the Clown might still occasionally show up, the character's broad popularity peaked in the United States in the 1960s as a result of the widespread TV franchising. The most successful Bozo in the franchise aired on WGN in Chicago from 1960 until 2001. Harmon claimed that more than 200 actors have portrayed the clown. The most famous is former Today Show weatherman, Willard Scott.

After his stint as Bozo the Clown, WSIX's Joe Holcombe said occasionally someone would recognize him and ask, "Didn't you used to be Bozo?" "I still am inside," he would reply. "There's a little Bozo in all of us." 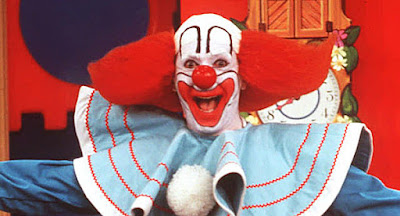