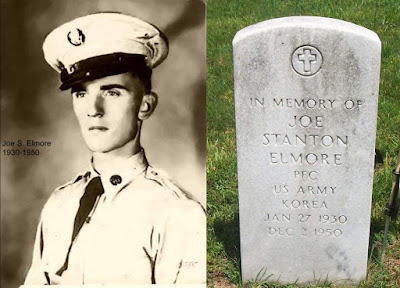 Mary Bowlin prayed for 68 years that her brother Joe's remains would be found. She was 15 years old when he was officially declared Missing in Action during the Korean War.

Joe Stanton Elmore, the son of Ambrose and Bertha York Elmore, was born in the Neathery/Cave Springs area of Clinton County, Ky on January 27, 1930. There is a group photo of Cave Springs School from 1939 that shows him at age nine standing on the back row. The school was located on Albany Landing Road. Later, his family would move to the Seminary community near there.

He was 20 years old when he decided to join the Army. According to Mary, he said, "I want to serve my God and my country." Before the war in North Korea, Joe had never been out of the state of Kentucky, except for the occasional trip to Byrdstown to see a picture show. He had been assigned to Company A, 1st Battalion, 32nd Infantry Regiment, 7th Infantry Division, where he eventually became Private First Class Joe Elmore.

In late November 1950, Joe and approximately 2,500 other U.S. and 700 South Korean soldiers, primarily infantry, artillery and tank units, assembled into the 31st Regimental Combat Team, which was deployed along the eastern shore of North Korea in the South Hamgyong Province. On the 27th, about 120,000 Chinese troops surprised 30,000 U. S. troops and a few troops representing the United Nations. A brutal 17-day battle in freezing weather soon followed. The Battle of Chosin Reservoir, as it came to be called, was fought between Nov. 27th and Dec. 13th. On Dec. 2nd, the 31st Regimental Combat Team, later called Task Force Faith, was destroyed. Pfc. Elmore was declared MIA on Dec. 2, 1950 and was presumed dead on Dec. 31, 1953.

Numerous remains of soldiers who died during the Korean War were eventually sent to the National Memorial Cemetery of the Pacific, also known as The Punchbowl, in Honolulu, Hawaii where they were interred only to be exhumed and kept in a forensic lab in the mid to late 1990's, following the creation of the Korean War Missing DNA Project. In 1995, Mary and her sister, Lola Smith, who died in 2012, submitted their DNA to that project. The Army found Elmore’s remains five years ago and informed Mary that they were 99.9% sure the remains were that of her brother.

Finally, on July 5th, the Defense POW/MIA Accounting Agency informed Mary that the DNA she and her sister had provided all those years ago was a 100% match to the remains that the Army had located. They had accounted for the remains of her long lost brother. After 68 years, Mary's prayers had been answered.

Joe Elmore's remains will be flown home on August 15th. On August 17th, he will finally be laid to rest near his family at Story Cemetery, on the same Albany Landing Road, where he had received his schooling as a child.