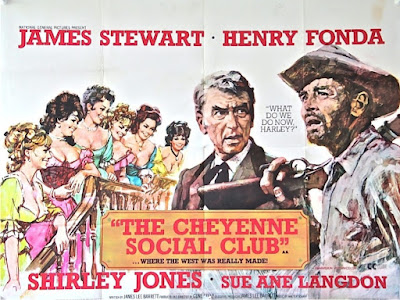 The Cheyenne Social Club is a 1970 western comedy film directed and produced by Gene Kelly and starring James Stewart, Henry Fonda, Shirley Jones and Sue Ane Langdon. Set in 1867, it's about an aging cowboy, John O'Hanlan who inherits a brothel and decides to turn it into a respectable boarding house, against the wishes of both the townspeople and the ladies working there.

O'Hanlan (Stewart) and Harley Sullivan (Fonda) leave their jobs working on open cattle ranges in Texas to make the 1,000 mile trek to Cheyenne. Along the way, they engage in quite an interesting conversation, except it's Sullivan who does most of the talking.

Harley Sullivan: "I remember when I was about twelve years old. My daddy asked me, he says, 'What do you want to be when you grow up, Little Harley?' And like a fool, I said a cowboy. I've been making wrong moves ever since."

Harley Sullivan: "Did I ever tell ya how my Uncle Charlie got stoved up?"
John O'Hanlan: "No, Harley."
Harley Sullivan: "His home set right out in the prarie. One day he went in the outhouse and got caught right in the middle of a stampede. When he went in there wasn't a cow in sight. A few minutes late 365 longhorns ran over him. Broke him up something terrrible. That was nineteen years ago and he's still constipated."

John O'Hanlan: "Harley, did you ever get married?"
Harley Sullivan: "Yes, John, I did."
John O'Hanlan: "Well, I never knew it."
Harley Sullivan: "Well, John, it ain't something I like to talk about, but I was married once. And once is enough for any man. You can't smoke, chew, dip, drink, scratch in the parlor, or cuss. When you leave the house, they ask you where'd you go. And when you come home, they ask you where have you been. And right now with you, it is just like when I was married."
John O'Hanlan: "Why, how is that, Harley?"
Harley Sullivan: "Well, John, when a woman's talking to you, you can be pretty sure that she thinks she's in control. And when she's not talking to you, you can be pretty certain you're in control. Take Helen. She had flame red hair, pitch black eyes, ruby lips and no teeth - but talk about a body! She could straddle two horses at the same time. I went with her until I found out she dipped snuff. There's something awful unfemale about a snuff dipper - don't you think so, John?"

Harley Sullivan: You just ain't the man you was yesterday. At least ways not from where I stand."
John O'Hanlan: "Well, maybe you're not standin' in the right place Harley! What do you mean I'm not the man today I was yesterday?"
Harley Sullivan: "Just, like you lost yourself when you took a bath!"

Fonda drones on and on as the pair travel across the vast Western landscape, about his family and dogs and heaven knows what all else. Finally...