"Roy Clark, Thanks For Coming" 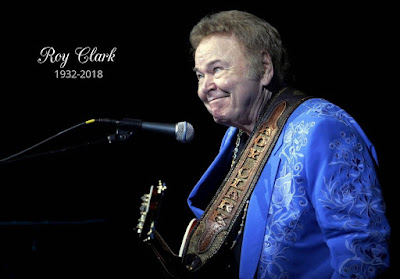 I don't know whose idea it was to form the Hee Haw Gospel Quartet, but boy was it a good one. Formed In the late 1970s, the quartet consisted of Roy Clark, Buck Owens, Grandpa Jones and Kenny Price. They would gather around a microphone and sing a gospel hymn at the end of the show's last segment. Several of the quartet's performances were released as recordings. We had two albums at WANY and we played them a lot. When Elmer Goodman died Sid Scott told me he had regretted not taking him into a recording studio with The Singjng DJ's and recording a gospel album in Hee Haw Quartet fashion. That would have been awesome.

Yesterday when I first heard that Roy Clark, a Grammy-winning country music singer-guitarist, had died of pneumonia complications at the age of 85, I immediately thought of the Hee Haw Gospel Quartet.

Clark was born on April 15, 1933 in Meherrin, VA, but his family moved to Washington, D.C. when he was a kid. His father played in a square dance band and took him to free concerts by the National Symphony and by military bands. “I was subjected to different kinds of music before I ever played,” Clark once said. “Dad said, ‘Never turn your ear off to music until your heart hears it — because then you might hear something you like.”

Roy started playing the guitar when he was 14 years old. In the early days of his career, he performed with banjo player David “Stringbean" Akeman. He said, "We would play drive-in theaters, standing on top of the concession stand. If the people liked it, they'd honk their horns."

Roy began making records in 1954. It didn't take long for people to sit up and take notice of his guitar playing. In the mid 1950s, he honed his television chops as a regular on Country Style, the D.C.-based television show hosted by Jimmy Dean, eventually taking over as host after Dean relocated to New York

. His big break came in 1960, when he was invited to Las Vegas to open for Wanda Jackson. After her band broke up, Clark hired her manager, who secured him appearances on The Tonight Show and Beverly Hillbillies. Clark was guest host on “The Tonight Show” several times in the 1960s and 1970s, a rarity for a country performer at that time. Yankee's baseball great Mickey Mantle was moved to tears when he heard Roy sing “Yesterday When I Was Young” and for years made Clark promise to sing it at his memorial, a request granted when Mantle died in 1995.

His first hit single came in 1963 with his recording of the Bill Anderson song, "Tips of my Fingers." He scored a huge hit in 1969 with one of his most beloved recordings, "Yesterday When I Was Young." He followed that up in 1970 with, "Thank God and Greyhound She's Gone." His 1973 hit "Come Live With Me," went to #1. His recording of "Alabama Jubilee" won him a Grammy Award in 1982. He was also known for his instrumental versions of “Malaguena,” on 12-string guitar, and “Ghost Riders in the Sky.”

As if his pickin' the banjo or the guitar wasnt enough, Roy's sense of humor captured the hearts of his fans. In a 1966 appearance on the TV show, Swingin’ Country, the host, Rusty Draper, asked him, “About how long have you been performing?“ Without skipping a beat, Clark said, “About three months.”

The music-comedy TV show, Hee Haw, greatly impacted a whole generation of people, thanks largely to one of Kornfield Kounty's most popular residents, the show's co-host, Roy Clark. CBS launched Hee Haw in summer 1969 as country music’s answer to Rowan and Martin’s Laugh-In. Each episode was filled with country music stars and down-home comedy skits. It lasted three seasons on the network before moving to syndication, where it aired for 22 more years.

Hee Haw was theme-based on rural culture, although it was not limited to a rural audience. It was successful in all of the major markets, including New York, Los Angeles, Boston, and Chicago.

The show provided a lot of laughs, and plenty of country music. Buck and Roy hosted the show through most of its run for most of its run. Their dialogue at the beginning of each show became one of most popular quotes ever: "I'm a-pickin' (Buck Owens)and I'm a-grinnin' (Roy Clark.

My favorite Roy Clark skit was set in a barber shop with Archie Campbell, a barber, cutting Roy's hair as he told one if his stories, like the one about Rindercella, her mugly other, two sad bisters and a very prandsom hince, or how about the "Oh that's good, no that's bad" gag? There was also the one where Roy would raise up from behind the counter to exclaim "Empty Arms Hotel!" Clark said Hee Haw capped off his career. “This was the icing on the cake," he said. This put my face and name together.” Another favorite of mine was the lamentful song "Gloom, Despair and Agony on Me," featuring Roy Clark, Buck Owens, Gordie Tapp and Archie Campbell.

Roy Clark was member of the Country Music Hall of Fame and Grand Ole Opry and has a star on the Hollywood Walk of Fame. He also won the Acedemy of Country Music’s Pioneer Award. Beginning in 1983, Roy opened the Roy Clark Celebrity Theatre in Branson, Missouri, and was one of the first country entertainers to open a theater there. Dozens followed him.

Roy was all about spreading love and good cheer. One of my all-time favorite quotes came when he said, "The next chance you get, do somethin' nice for somebody - say 'good day,' hold a door open - and don't wait around for a thank you...you don't need it." If only we would all do that, the world would be a better place. Roy must have known that.

He appreciated his fans and always let them know that he did. At the end of his concerts, he would tell the audience: “We had to come, but you had a choice. Thanks for being here.”

Yes, we had a choice and we chose you, Roy Clark. Thanks for coming. We were not let down. Thank you for the music, and for the laughs.

I close my story with the Hee Haw Gospel Quartet singing a beautiful rendition of Amazing Grace, featuring Charlie McCoy on harmonica.