In the Manuscripts & Folklife Archives section of the Department of Library Special Collections at Western Kentucky University in Bowling Green, Kentucky is a letter addressed to George W. Burchette, a civil war soldier born in Clinton County, Kentucky, who was in the service of one our nation's greatest presidents and recognized by another.

George Washington Burchette was born on August 27, 1843 to John Calvin Burchette and Polly Branham. He was the grandson of Icil Burchett. On September 29, 1861, soon after the Civil War began, George enlisted in the Union Army's 12th Kentucky Cavalry, where he became a 1st Sergeant. He served until July 24, 1865. Although he fought in battles at Mill Springs, Fort Henry, Perryville and elsewhere, it is what he did at the war's end that he became known for. 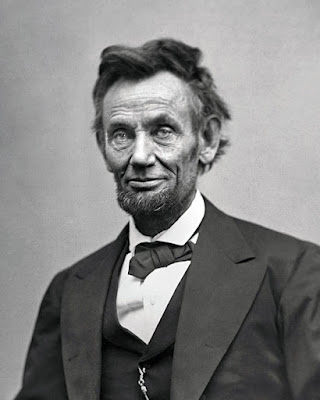 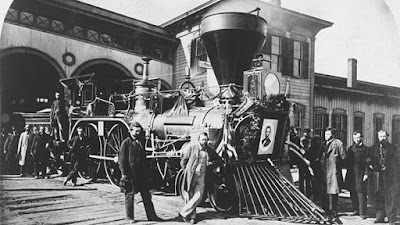 The train left Washington, D.C. on April 21 and traveled 1,654 miles through Washington, Maryland, Pennsylvania, New York, Ohio, Indiana and Illinois, never exceeding 20 mph, to the final stop at Springfield, arriving there on May 3. Following his assassination on April 14th, over the course of 20 days, the president's coffin made 14 stops between Washington DC. and Springfield, Illinois, retracing the route Lincoln had traveled to Washington as the president-elect on his way to his first inauguration, more than four years earlier. Millions of Americans came to view the train along the route and to participate in ceremonies and processions that were held at each stop. The normal routine of everyday living stopped; work, stores, businesses, schools...everything came to a standstill. At each train depot,.and along the streets, tens of thousands of people came and stood in silence, waiting patiently for the Great Emancipator. Most wept.

The Lincoln Special sojourned from Washington, D.C. through Baltimore Maryland, Harrisburg and Philadelphia Pennsylvania, New York City, Albany and Buffalo New York, Cleveland and Columbus Ohio, Indianapolis and Michigan City Indiana, and finally to Chicago, where George Washington Burchette had been chosen as one of 24 men who would serve as funeral guards (Guard of Honor) and for Lincoln's body as it was taken from the train depot to Cook County Courthouse to lie in state.

When the funeral train arrived at Chicago's Park Place, a signal gun was fired, and the tolling of the bell on the courthouse announced the news to the citizens, but there were already thousands and thousands of people congregated in the vicinity of the funeral arch. The vast multitude stood in profound silence and reverently uncovered their heads as the coffin was borne to the dais beneath the grand arch, while the great Western Light Guard Band performed the "Lincoln Requiem," composed for the occasion. Thirty-six young lady pupils of the high school, dressed in white and banded with crape, then walked around the bier and each deposited an immortelle on the coffin as she passed. The coffin was then placed in the hearse, prepared expressly for the occasion, and the funeral cortege passed out of the Park Place into Michigan avenue, and fell into procession.” 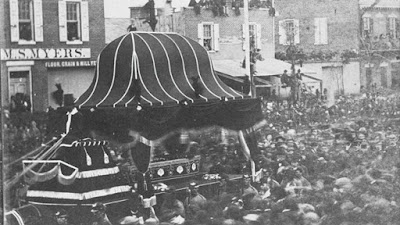 “He comes back to us, his work finished, the republic vindicated, its enemies overthrown and suing for peace,” editorialized the Chicago Tribune. “He left us, asking that the payers of the people might be offered to Almighty God for wisdom and help to see the right path and pursue it. Those prayers were answered. He accomplished his work, and now the prayers of the people ascend for help, to bear the great affliction which has fallen upon them. Slain as no other man has been slain, cut down while interposing his great charity and mercy between the wrath of the people and guilty traitors, the people of Chicago tenderly receive the sacred ashes, with bowed heads and streaming eyes.”

John Carroll Power, an historian who served as the first custodian of the tomb of Abraham Lincoln, described the funeral procession: “It was a wilderness of banners and flags, with their mottoes and inscriptions. The estimated number of persons in line was 37,000 and there were three times as many more who witnessed the procession by crowding into the streets bordering on the line of march, making about one hundred and fifty thousand who were on the streets of Chicago that day, to add their tribute of respect to the memory of Abraham Lincoln.” 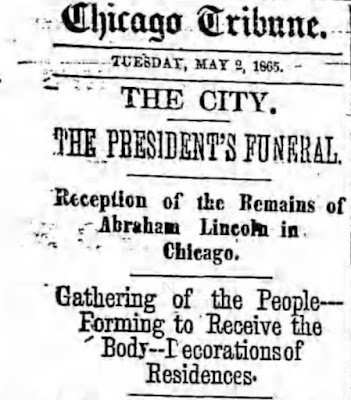 The viewing itself at the courthouse lasted for 28 hours, ending on May 2 at 8 P.M.. Power wrote: “The coffin was then closed and carried to the hearaw. The Light Guard Band performed a requiem as the remains were being transferred. An immense procession, bearing about three thousand torches, was already in line, to escort the remains to the depot. At a quarter before nine o’clock, it moved to the time of numerous bands of music. While the preparations for starting were in progress, the choir continued to sing funeral dirges, and twenty-five Sergeants of the Veteran Reserve Corps stood around the funeral car with draw swords. At half-past nine o’clock, the funeral cortege moved slowly out of the depot to the strains of a funeral march by the band, while the bells of the city tolled a solemn farewell to all that was mortal of Abraham Lincoln.”

U.S. Sanitary Commission activist Mary A. Livermore recalled: “There was none of the hum of business; none of the rush and whirl and hot haste that characterize Chicago, – but closed stores, silent streets, and sadness resting on all faces. Flags bound with crape floated mournfully at half-mast. Black draperies shrouded the buildings. All talk was low and brief. Many wept as they walked, and on the breast or arm of all were mourning badges. All nationalities, creeds, and sects were ranged along the route to be taken by the funeral cortége, or stood amid the solemn pageantry and funeral splendor of the great procession.” 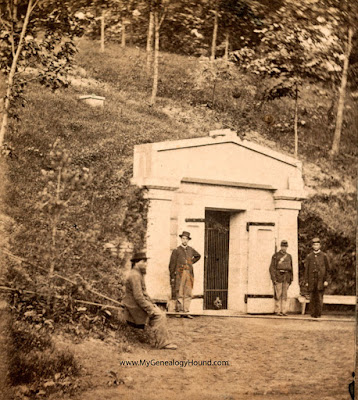 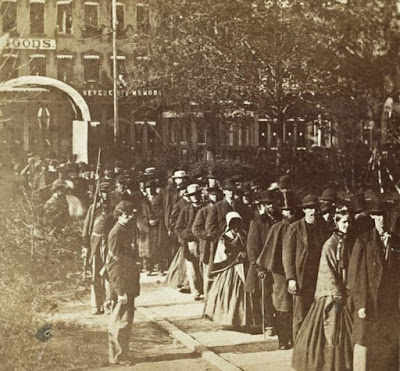 George Washington Burchette was 22 years old when President Lincoln was assassinated. Being a member of the funeral guard brought him much notoriety back home in Cumberland and Clinton counties in Kentucky. After the war, he was appointed to oversee a group of 40 men who assisted the sheriff's of both counties in getting rid of bushwackers. He went on to become one of the Burkesville community's outstanding citizens and was elected state senator of Clinton and Cumberland counties. 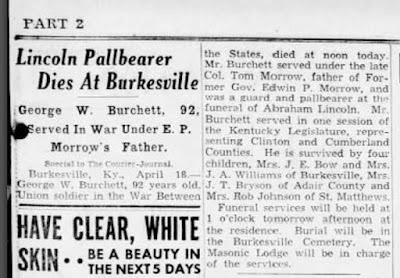 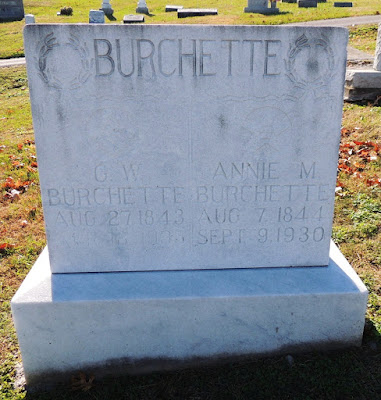