The Day the Civil War Came to Albany, KY, Pt. 2 (The Making of Champ Ferguson) 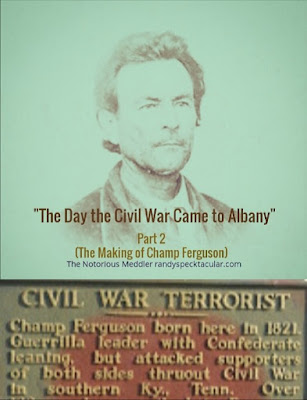 When the Civil War finally did come to Albany, word spread quickly throughout the area of Southern Kentucky and Northern Tennessee. Allegiances were soon declared. "Everybody of military capability was expected to go to war," wrote Cordell Hull. "It really did not make so much difference which side he fought for. He had the privilege of selecting his own side, but he could not lie around the community, shirking and dodging. He had to go out and fight."

With the military-capable soldiers gone off to war, the region was left vulnerable to guerilla warfare. Despite the presence of home guards, which were left behind to defend their counties, the area became a gloomy no-man’s land, where bands of armed men from both sides roamed freely, spreading violence and bloodshed, ravaging homes and farms, stealing horses, livestock, food, money and anything else they could get their hands on.

"The land was full of robbery and murder," wrote David Sullins in his book, "Seventy Years in Dixie." "Bands of the worst men seized the opportunity by scouring the country by night, calling quiet old farmers to their doors and shooting them down in cold blood. It was the reign of terror, war at every man’s door, neighbor against neighbor. Neither property nor life was safe by day or night."

An incident involving twin brothers, Alexander and Floyd Evans, and their younger brother, Stokley, of what would eventually become Pickett County, came to play a major role in most of the Confederate guerilla warfare that took place in this area. It just so happened their sister, Amanda, was married to a cousin of Union guerilla Tinker Dave Beaty.

The incident I am speaking of began one day in the fall 1857, when the three brothers made their way from Fentress County across the state line to Clinton County to purchase hogs from Ben, Jim, and their brother...Samuel "Champ" Ferguson. He had been born in 1821 near Elliot's Crossroads, the main road leading into Clinton County from Tennessee (intersection of highways 969 and 1076 at Maupin). Floyd left a note for payment with the Fergusons and arranged a meeting in Albany to complete the transaction. When the Fergusons went to collect the money, Alex told them that Floyd had skipped town with the money. Champ and another man filed a lawsuit against Floyd.

As time went on and Floyd still had not been seen or heard from, the Ferguson's got it in their heads that the Evans’ were pulling an elaborate hoax to get out of debt. They decided that whenever Stokley or Alex were around they would take their horse as payment and eventually caught Alex in Clinton County and stole his horse.

Champ dropped the lawsuit filed in Clinton County Court on July 5, 1858 after Floyd had returned and secured his debt. Around the same time, Alex filed charges against Champ for his horse thievery. Alex and Stokely were said to be furious with Champ for stealing their horses and trying to claim it was a repossession by a creditor, when Floyd was the one who owed the money. They began speaking about it in public, which Ferguson took as threats on his life.

As fate would have it, on August 12, 1858, Ferguson and the Evans brothers all showed up at a camp meeting on Lick Creek in Fentress County. When Ferguson got on his horse to leave, the Evans' began throwing rocks at him. As he rode off, they gave chase. Realizing his young mare could not outrun their horses, Ferguson dismounted and took off on foot. Floyd Evans came up, still throwing rocks, and Ferguson picked them up and threw them back.

About that time, Constable Jim Reed rode up and when he tried to arrest Ferguson for stealing the horse, a fight broke out that resulted in Champ stabbing the constable to death. The story goes that Fentress County Justice of Peace James Zachary charged Champ with killing Reed, but made a deal with him that he would be released if he agreed to help the Confederacy. Champ, of course, agreed. It could also have been that Champ wanted revenge on the Evans' and Taylor's, who had strong Union connections, and chose to fight for the Confederacy for that reason.

After the war, Champ Ferguson became one of only two Rebels to be tried and convicted of war crimes. He was charged with fifty-three counts of murder, although he claimed he killed over 100 soldiers and pro-Union civilians. He was hanged on October 20, 1865 in Nashville.

During the war, rumors abounded that Ferguson commited his atrocities to get revenge against the Union for the raping of his wife, Martha, and daughter, Ann, by Union soldiers, who supposedly then stripped them naked and made them run through the streets of Albany. However, during his testimony, Ferguson dismissed the story as untrue. There was also the rumor that he sought revenge on the Union for the murder of his son, but in reality Ferguson’s only son and his first wife, Eliza Smith, both died from disease in 1845. The tent meeting and subsequent encounters with the Evans brothers is what Ferguson himself testified to in court as being the real reason why he entered the war.

By the way, Stokley Evans was shot and killed by unknown Confederate troops on August 3, 1862. Since his wife had just previously died during childbirth, their orphaned children who remained were sent to live with his sister, Amanda, and her husband, Pleas. On a personal note, just after the war, she became a member of my church, Clear Fork Baptist Church, but in 1968 she and fifty other members left to organize Beech Bottom Baptist Church.

On a more personal note, Pleas Beaty (short for Pleasant) was the nephew of Union guerilla Tinker Dave Beaty's father, George, who was my fourth great grandfather.