Paul Denney had a Fighting Spirit, full of Courage and Guts

In this week's Clinton County News, Al Gibson reports the passing of Paul Denney, who played basketball for the Clinton County Bulldogs and was a member of the 1961-62 team that was, as Al put it, "perhaps the best team that Coach Lindle Castle put together back in that time period."

Here's why he said that. The team, which consisted of starters Kenneth Conner, Jackie Sewell, Tom Neathery Sherman York and David McFarland, won 30 games and lost only four games. Two losses occured during the regular season, to Adair County and Campbellsville Durham, and two in post-season play, to Metcalfe County in the district tournament championship game and to Allen County in the region semi-finals. The two losses during the regular season occured when Sewell was out due to sickness.

The Bulldogs won their first 21 games that season, and according to Litkenhous Ratings were ranked 9th in the state going into the district tournament. The season-ending loss to Allen County in the region semi-finals, 53-to-47, has always been called a very questionably officiated game, especially down the stretch. By the way, the remaining roster that season included Kay Flowers, Wayne Cook, Babe Weaver, A.V. Conner, W.L. Sawyers, U.S. Reneau, Whiz Latham, Don McWhorter, Jim Thrasher, John Hay and Bill McDonald.

It was Clinton County's fourth straight trip to the regional tournament, a tournament we had won two years earlier. As great as that team was, this 1961-62 team was phenomenal. "It has been one of the best seasons ever witnessed by a Clinton County team and fans," wrote Clinton County News sports writer, Jimmy Huccaby.

Paul Denney was one of five seniors on that team. "He was the sixth man, who could have easily been a starter," said teammate Sherman York the day after Paul passed away. "He proved it when he went on to star at the two-year Walker Junior College in Jasper, Alabama, where family members say he led the individual scoring both years." McFarland was also played at Walker with Denney. According to York, after his second and final season there, Paul had intentions of finishing college and playing basketball at Tennessee Wesleyan, but instead wound up in Vietnam. He moved to Monticello following Army life and years later he and his wife and her brother operated Monticello Machine Shop after the original owner, Bill Crawford, retired.

Prof Robinson said, "Paul Denney is a mighty good defensive weapon with a fighting spirit, full of courage and guts. As the first player off the bench, Coach Castle used him wisely at appropriate times."

Both York and Sewell had nothing but high praise for Denney, not just as a player, but as a person, too. His funeral service will be held this Saturday at 2pm eastern time at Hicks-Vaughn Funeral Home in Monticello, with visitation beginning at 10am that morning. 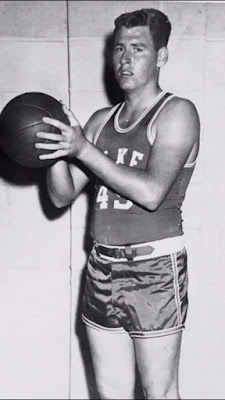