One November day, back several years ago, Jack Bell stopped by the radio station to tell me that his birthday that year was going to be on Thanksgiving Day. I was scheduled to work that day and told him to come by around 12:30 and I would put on a long-playing CD and we would go to Horseshoe Grill, where I would buy him lunch.

Somehow Gene Ferrill found out about it and suggested I bring him to the jail. Since he and his wife would be serving Thanksgiving meals to prisoners that day, we were welcomed to join them, and we did. There was even a birthday cake! Afterwards, we took Jack outside, where he posed for a photograph beside the Clinton County Jail sign. In that photograph he was holding a shotgun, a throwback to the days when Jack worked as a deputy under sheriff Johnny Cummings. Both Gene and I felt good about all that had transpired that day and in the years to come would often reminisce about it. It was, and will always be, my most favorite Thanksgiving Day.

Gene Ferrill was a household name in Clinton County. He was our jailer for five terms, and was currently serving a second term as city councilman. Precisely put, the definition of him was 'someone who possessed a quiet and gentle spirit, one of humility and immense love for other people.' He liked reading my stories, he said, because it was a way for him to keep up with me during stretches when we were unable to see each other to talk about old times. "Good times," he would say, and good times they were.

One of my favorite memories of Gene, when his mother was living, was when he would advertise on the radio, be it a campaign ad for jailer, or a Christmas greeting. He would always end his speech by telling his mom how much he loved her. His devotion to family and friends is worth mentioning, because none of us will be forgetting him anytime soon. His gentleness and tender love towards people spoke volumes. 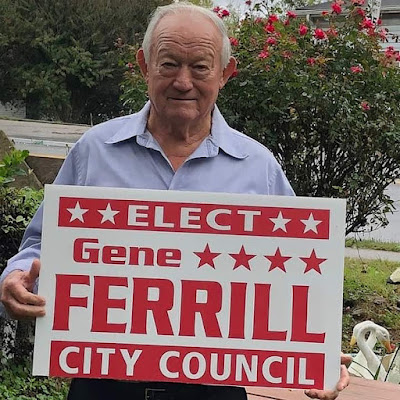