Preacher Isaac Denton was among the early settlers who arrived on the Kentucky-Tennessee border between 1798 and 1799, just as the second great awakening was getting underway. That event, which lasted into the early 1800's, brought comfort in the face of uncertainty after our founding fathers changed the way of life by establishing the separation of church and state in the first amendment to the Constitution.

While the first great awakening some sixty years earlier had focused on religious reform, the second one focused on moral reform. It also brought about an outpouring of religious fervor and revival. Extraordinary numbers of people converted from Congregationalists, Anglicans and Quakers to evangelical Baptists and Methodism. On the local scene, soon after his arrival, Bro. Denton held a camp meeting and began preaching to the other settlers. One of the results from that was the organizing of Clear Fork Baptist Church on April 1, 1802.

This week we are celebrating 220 years as the oldest continuing congregation in this region. Only by the grace of God has this "Lighthouse in the Wilderness" been allowed to exist all these years. She has faced many struggles and hardships, but thanks be to God for sending great men like Isaac Denton to lead us. Today, our pastor, Bob Sawyer, has been leading us now for 30 years. God has truly blessed us!

"Who hath saved us, and called us with an holy calling, not according to our works, but according to his own purpose and grace, which was given us in Christ Jesus before the world began." (2 Timothy 1:9) 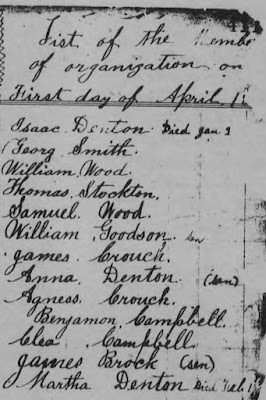