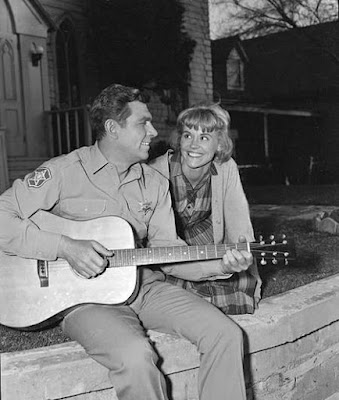 Andy Griffith was born in Mount Airy, NC on this day in 1926.

One of the actors that had a minor role in the Griffith's 1957 movie, "A Face In The Crowd," was blues singer/guitarist Brownie McGhee. Andy befriended him and apparently liked Brownies choice in instruments, a Martin D-18 guitar. In the movie, two guitars were needed, a cheap-looking one used by his character before he became famous, and a fancier one when he became the successful 'Lonesome Roads." The prop master took a beautiful 1958 Martin D-18, painted it black and glued sequins on the guitars sound board to spell out "Momma." "Lonesome. Momma" was a reference to the name Lonesome Rhodes gave to his guitar.

After the film was completed, Griffith took the painted D-18 home, removed the sequins and sanded off the black paint down to the bare wood. He also sanded off the logo decal and pickguard. He liked the look of the guitar without the pickguard and never replaced it. A guitar builder in New York City touched up to the wood and gave the instrument a new coat of lacquer. Griffith played this Martin guitar on and off his TV shows for nearly 50 years.

In 2004, the Martin guitar company produced 311 Andy Griffith Signature D-18's and then discontinued the guitar. Manufacturers lolsuggest price was $3,700, however used models can be purchased for around $2,500 and sometimes pop up on eBay.