Mr. One Of A Kind 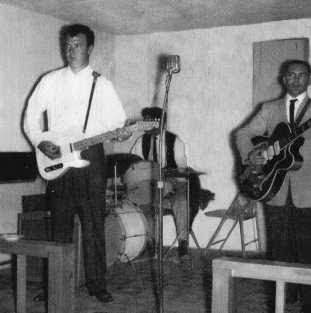 Sonny West is well-known for writing Oh Boy! and Rave On for Buddy Holly and the Crickets. Like all aspiring musicans and singers, Sonny had big dreams.


In 1956, he tried to audition for Sam Phillips at Sun Records, but was turned down. As fate would have it, he moved to Lubbock and met Buddy Holly. If Sonny West wasn't destined to make it as a singer, he was bound to make it as a songwriter. Oh Boy! was a worldwide smash hit and is now one of the all-time great rock 'n' roll classics. The song passed the one million airplays mark in 2000, earning Sonny a Citation of Achievement from BMI. Rave On achieved such an immediate response that it was released as a single right away.

But, before any money started coming in, Sonny found himself cold, hungry and broke, and down and out from trying to make it as an artist himself. Feeling rejected, he left Texas, vowing he'd never live there again. He moved to Grants, New Mexico, where he began frequenting Mike's 66 Club, located on the outskirts of Grants on Route 66. He became friends with the guitar player in the band. His name was George Hudson. This is his story.

George and my dad had been guitar-playing buddies when he lived in my town. They performed together often and were very popular. George and other musicians would come over to dads house, where they would play and sing for several hours. He was small in stature and wore his hair long on top but slicked back with oil, probably Brylcreme. He had long, cigarette-stained fingers that would wrap around the neck of the guitar. A lot of what my dad knew about the guitar, he learned from George Hudson. At the club in Grants, George played a Gretsch f-hole electric guitar. (Dad would later purchase a Chet Atkins Gretsch.) Sonny West told me that one night he and George were discussing guitars, and Sonny told him about a new spring reverb, known as a Space Expander, which he had recently bought from a jukebox supply company and installed in his amplifier. He told me that George was so crazy about it, that he installed one in his amp, too. Soon, a vacancy in the band opened up and Sonny was immediately hired. Sonny said George was a fantastic guitar player (which is something I have heard my entire life). He said George was a natural at playing his guitar, and that he could play lead all night long. He said, "I loved George very much. He was one of a kind."

One night I was visiting Sonny West's website and saw the above photo. Up to that point, I did not know that George Hudson had performed with him. I e-mailed Sonny and he told me the above story. He said he often wondered what ever became of George Hudson. It was up to me to tell him.

It was early 1963 when George left Grants and moved to Beech Grove, Indiana. Several months later my family also moved there, and dad and George got the chance to play music together once again. In February of 1965, I stayed at George Hudson's home while my mom gave birth to my youngest brother, Mark. And then, one night, some three months later, George was performing and had done so well that he was called back to the stage for two encores. The crowd beckoned him for a third one, but he refused, saying his head was hurting. When the pain would not go away, George was taken to a hospital, where doctors found a brain tumor. He died a short time later. My parents attended his funeral, and it wasn't long before we moved back to Kentucky.

Note: While living at Beech Grove, Dad also worked at WGEE-AM, where he was voted DJ of the Year for Small Markets. WGEE is the same radio station where David Letterman worked ten years later, but by then it was known as WNTS. Also, while performing in Indianapolis one night, dad met Jack Barlow, who went on to record three songs co-written by dad, Barlow and others, including I Love Country Music (And I'd Rather Fight Than Switch), which helped launched Barlow's career in country music, and went as high as number 18 on Cash Box.
at October 25, 2008