My great-grandmother, Della Craig Means, was the granddaughter of Ellison Leslie, who was the brother of Kentucky Governor Preston H. Leslie. During the revolutionary war, their grandfather, and my 5th great-grandfather, Dennis Hopkins, Jr. served in the Randolph County, North Carolina Militia. He was twenty years old when he joined.

Dennis filed his Revolutionary War Pension Application in Clinton County on Jan. 2, 1843, at the age of 82. Born on July 13, 1760, in Orange Co., North Carolina, he was raised in Randolph Co., where he lived during the Revolutionary War. He entered the service as a light horse soldier in Randolph County for three months, beginning in October of 1780, under Capt. Wm York and Maj. Thomas Dogin. He was drafted at the house of Betty Cole and marched down Deep River ranging throughout Randolph and Chatham counties and was stationed some considerable time at the barracks in Chatham county on the Plantation of Col. Littrell. A portion of the time he also stayed at Bell’s Hill in Randolph County, where the company's headquarters were located. He also participated in marches through Guilford and Orange counties. He was shot in his foot during a skirmish with the Tories in Randolph County but still served out the full term of three months before receiving a written discharge from Capt. York sometime in January of 1781.

Dennis volunteered for another three months on April 1, 1781 and marched down Sandy Creek to his previous station at Col. Littrell’s Plantation at Bell's Mill. During his time at war, he said he caught, whipped, killed and hung many Tories or helped drive them out of the country. Sometime around July, he marched to the Randolph County Court House, where he received his final discharge as a revolutionary war soldier.

Dennis Hopkins died on June 26, 1850 at the age of 90. He is buried at Hopkins Cemetery in Clinton County, Kentucky. 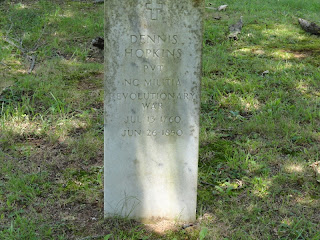