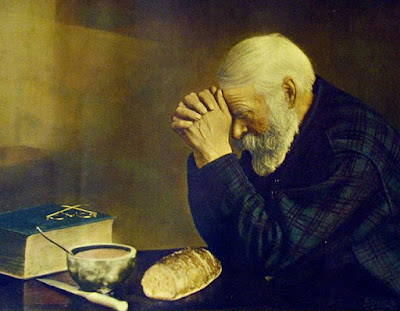 This photograph has lots of memories for me. All through my childhood, up into my earlier adult years living at home, it hung on the wall facing our kitchen table. Times, life in general, were simpler back then. Sometimes I long for those days to return.

Grace was photographed by Eric Enstrom st his studio in Bovey, Minnesota. Most sources note the year as 1918, though Enstrom's daughter Rhoda, born in 1917, claimed to remember being present when the photograph was taken, and it may have been taken closer to 1920. The man in the photograph, Charles Wilden, was a Swedish immigrant who lived in nearby Grand Rapids, earning a meager living as a peddler and living in a sod house. While the photograph conveys a sense of piety, the book shown in the photo is a dictionary, not the Bible.

What happened to Wilden after the photograph is unclear. In 1926 he was paid $5 by Enstrom in return for waiving his rights to the photograph. He disappeared thereafter. After the photograph became popular, Enstrom attempted to track Wilden down but was unsuccessful. Various family members and local historians have also attempted to determine what became of Wilden but have not been able to locate definitive evidence.

Enstrom first licensed the photograph to Augsburg Fortress in 1930. In the 1940's, his daughter colorized the photo by hand. This version was used in prints produced in the 1940s onward and became the more widespread and popularly known version of the photo.

Enstrom earned a modest sum from the photograph for the remainder of his life. He died in 1968.
at December 01, 2015