George A. Guinn was a deaf taxi driver, who transported people between Albany and Monticello. Born on August 4, 1868, he was the grandson of Reuben Bayless Wood, who was murdered by Champ Ferguson during the civil war.

(From Albany's New Era newspaper...)
"Mr. George A, Gwinn, successful farmer and influential citizen of near town, died in a Nashville hospital, Sunday, June 16, where he had been following a stroke of paralysis at his home Friday. His death removes one of the county's most prominent citizens. He was seventy-two years of age, and is survived by his wife, formerly Mrs. Ida Mae Armstrong, and one brother, Mr. R. W. Gwinn of Danville. Funeral services were held at the Baptist church here Tuesday morning at 10:00 a. m., and were conducted by Rev. G. H. Lawrence through Sewell Funeral Home. The burial was in the Albany cemetery following the services at the church." 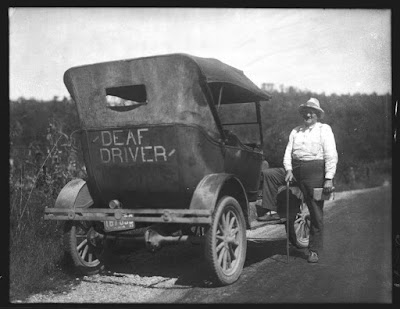