"On this the 2nd day of January A.D. 1843 personally appeared in open court, Dennis Hopkins a resident citizen of the County aforesaid aged eighty-two years the 13th day of July last, having a record of the same being born on the 13th day of July 1760, being born in Orange County North Carolina, and raised in Randolph County said State, where he lived in time of the Revolutionary war, and after being duly sworn for that purpose on his oath makes the following Declaration in order to obtain the Benefit of the act of Congress passed 7th of June 1832. That he entered the service of the United States a drafted light horse soldier in Randolph County North Carolina in the fall of 1780, believed to be in October cannot give the day of the month with precise certainty, entered for three months under Captain William York, and Major Thomas Dogin [Thomas Dugan?] and served three months Ralph Low Lieutenant, has now forgotten the name of the Ensign, and served with John Aldred, Christian Morris, John Julin, Jacob Staley, Archibald Hopper & Ezekiel Craft and others, he was drafted at the house of Billy Coal [Billy Cole?] and marched down deep River ranging and ranged through the County of Randolph and Chatham, and stationed some considerable time at the barracks in Chatham County on the plantation of Colonel Littrell [John Luttrell], and a portion of the times stayed at Bell's Mills in Randolph, where was our head quarters, and marched Chatham and continued traversing the Counties of Guilford, Orange, Guilford and Chatham had a skirmish with the Tories in Randolph was fired on by them, and served out the full Term of three months and had a written discharge from Captain William York having served out the time, believed to and sometime in January 1781, as near as he can recollect was discharged at the Barracks in Chatham County North Carolina. Declarant again volunteered about the first of April as near as he now recollects, and in the ensuing spring for three months under said officers, the time word so difficult, that he felt more safe in service, that otherwise. Served as before a horseman being in 1781, marched down Sandy Creek continued down the River and stationed again at Bell's Mills, and again at the Barracks on Colonel Luttrell's plantation and continued to range through the Counties of Chatham, Randolph and Guilford, and caught many of the Tories, whipped, killed and hung many of the Tories, and helped to disperse and drive the Tories out of the Country and having served out the full term of three months marched to Randolph Courthouse and there again had a written discharge from said Captain William York, discharged as he believes in July sometime cannot state the precise time with further certainty than herein stated. Declarant moved in about four years after in Randolph County said State and lived there next after his marriage thirteen years, and moved to Clark County State of Georgia lived there ten years, thence to Wayne County Kentucky where he has lived about thirty-two years, is now stricken off into Clinton County Kentucky, Declarant has no written or documentary evidence of his service and knows of no person by whom he can prove his service, that has a positive knowledge of the same, but he has no doubt, but he can prove by many of his old acquaintance that he is and has been so reputed by them that has been acquainted with him for about 30 years last past he will name Reuben Owens, Esquire and Benjamin Hancock Esquire of the same church with him, he will mention others George Delaney, a revolutionary man of this County, he will mention Vachel Lessly and Robert A. Dabney of his acquaintance, and believes many others would depose that they have a full belief of his service from the tradition of the country founded on a long acquaintance. He hereby relinquishes every claim to a pension except the present. Declarant has delayed making an application for a Pension principally because he knew of no person by whom he could prove his service, and not needing the benefit of said law some years past as much as he does now. He states his name is not on the Pension Roll of the agency of any State. Declarant lost both discharges in Kentucky some years past. Sworn to & subscribed in open court January term 1843 S/ Rice Maxey, Clk S/ Dennis Hopkins. [Westley Owens, John Wade and Jacob Holsapple gave the standard supporting affidavit.]"

On February 7, 1845, at age 84, Dennis Hopkins filed another complete application in Clinton County Court, however both applications were denied for lack of proof of service. 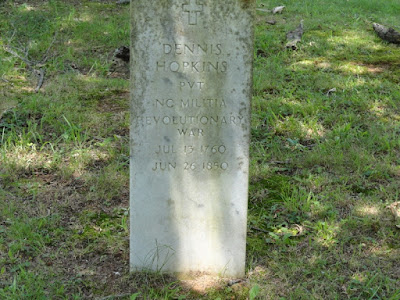