Dale Mann Was Larger Than Life 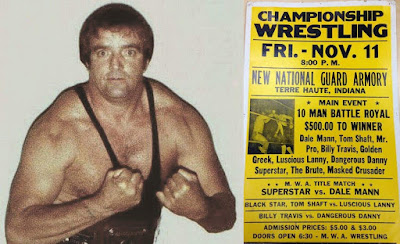 In the 1940's, Nick Gulas became involved in professional wrestling, working both as a manager and promoter in Florida. He teamed up with Roy Welch of Tennessee to form Gulas-Welch Wrestling Enterprises based in Memphis and Knoxville. In 1949, the group joined the National Wrestling Alliance, a national sanctioning body that divided the US into territories. The promotion became known as NWA Mid-America and expanded across several states. Jerry Jarrett was brought in as a booker to help handle the day-to-day work behind the scenes. This organization helped start the careers of such wrestling stars as Lawler, Yamamoto, Jackie Fargo, the Bounty Hunters and the Interns. Gulas-Welch and NWA also helped start the wrestling career of a man from Russell County, Kentucky. His name was Dale Mann.

One of the earliest matches Dale participated in occured on March 21, 1970 when he wrestled (and lost) to Lars Anderson (in wrestling, he was portrayed as Gene and Ole Anderson's brother) during an NWA "Championship Wrestling TV' match in St. Louis, Missouri.

In the early 1970s Nick Gulus' son, George, was promoted as one of the top wrestlers in the territory despite not having much talent. That eventually led to a split between Nick Gulas and Jarrett, who broke away to form Continental Wrestling Association in Memphis. Dale also broke away and began running Mid Continental Wrestling based out of Georgetown, KY, serving as kind of a hybrid between an outlaw and local promotion under the Mid America/CWA banner.

Dale Mann was born in Jamestown, KY on August 12, 1939 to Shannon and Rovena Neathery Mann. At approximately 6'3, he was first billed as "Big" Dale Mann. Later, he became known by his most popular nickname, Dale "TNT" Mann. He was loved and adored by every single wrestling fan who ever saw him wrestle. In a day of Bufford Pusser, he walked tall. He was our hero. He was our Billy Jack. One of the things I admired about Dale was the way the crowd rose to their feet and cheered wildly as he made his way to the ring in his customary brown suede jacket with long fringes. He meant as much to this area as Jerry "The King" Lawler meant to folks in Memphis.

Not only was Dale able to successfully promote himself, he also brought in many famous wrestling stars to this area, such as Tojo Yamamoto, Randy "Macho Man" Savage, his brother, "Leaping Lanny" Poffo, Bill Dundee, Dutch Mantel, Ron Starr, Tracy Smothers, Pistol Pez Whatley, the Von Brauner brothers and many others.

Mid-Continental later became Mountain Wrestling after Mann sold the promotion to Danny Fargo, whose claim to fame was as Eric Embry's partner in the Fabulous Blondes team. Fargo was MCW's number two baby-face for years behind Mann.

Over the years, many wrestlers who have gone on to fame and notoriety credited Dale Mann as their greatest influence. His most famous alumni who achieved worldwide fame was Jim Morris, better known in the wrestling world as "Hillbilly Jim." Morris was born in Louisville but grew up in Bowling Green. Dale heard about him through his son, Mike Mann, and brought him into the wrestling business. Fortunately for Morris, when Dale asked him if he would be interested in the wrestling business, he knew it was his big chance and went with it.

None of the wrestlers who began their careers with Dale Mann achieved worldwide fame on the level that Hillbilly Jim did. Along with Hulk Hogan, Andre the Giant, etc., Hillbilly Jim changed the world of wrestling as much as Chuck Berry, Buddy Holly and the Beatles changed rock and roll. They took wrestling from high school gymnasiums to the worlds largest coliseums. For Morris, the highlight of his career was participating in Wrestle Mania III at the Silverdome in Pontiac, Michigan, which was attended by 94,000 people. Hillbilly Jim was always announced as being from Mud Lick, Ky, which is actually located in Monroe County. Today, he lives in Bowling Green and hosts a great radio show on Sirius XM Radio.

Another wrestler who was brought in to the WWF that came from Dale Mann's wrestling stable was "Luscious Lanny Kean," who became Cousin Junior, a member of Hillbilly Jim's family, in the WWF. He later achieved more fame as Moondog Cujo and later, Bloody Ox Brody. Billy Travis also worked for Mann. He was Jeff Jarrett's original tagteam partner and eventual top heel to Jerry "The King" Lawler.

(show opens to the song, "Barracuda.")

(Announcers, David McLane and George Cannon, are at the desk)

(Dale Mann comes over to the desk)

David: "Dale we have not talked to you in awhile. You have been racking up wins lately."

Dale Mann: "Well David, yes i have been on roll here lately. I have been splitting time here in the WWA and have been busy defending my Mid-Continental belt in Kentucky."

David: "Dale, do you plan on defending that belt here in the WWA like Savage has done with the ICW belt that he lost?"

Dale Mann: "Well i am not sure what the commission in Kentucky would say about that. I do know i would like a crack at that ICW belt though."

(Angelo Poffo and Randy Savage come out to the desk)

Angelo Poffo: "Dale Mann, you need to go back to Kentucky. You will never get a crack at the ICW belt."

Dale Mann: "Angelo, unless Randy wins back that belt you have no say so about who gets a shot at that belt." (Dale Mann leaves)

Randy Savage: "Oh yeah, Joe Leduc you better be ready later today because that ICW belt will be back where it belongs around my waist."

Angelo Poffo: "And Ron Garvin we have not forgot about you." (Poffo and Savage leave) David: "Fans lets go to a commercial."

Most local wrestling fans remember when Dale worked with Angelo Poffo and his sons, Randy "Macho Man" Savage and "Leaping Lanny" Poffo in their outlaw International Continental Wrestling promotion. He brought several cards to this area, including one very big night when Randy Savage and Tojo Yamamoto came to Albany and wrestled at the brand new Clinton County High School gymnasium. What a night that was as a standing room only crowd of 3,500 people came to watch the famous wrestlers.

One thing Dale did, which we all loved, was make a wrestling star out of Clinton County's already legendary basketball star, Kenneth Conner. In the wrestling ring he was known as Chuck Connors. Together, they packed all of the gymnasiums in our area.

Dale's son, Mike Mann, became the very popular wrestling star, "Michael Ray, the Southern Sensation." Dale also made wrestlers out of Lonnie and Wayne Watson of Celina, who wrestled as Lon and Vaughn Watson. He also helped bring Clinton County's Wendell Burchett into the wrestling business as a referee, a wrestler and later, manager of the legendary Kurt and Karl Von Brauner brothers (Jimmy Brawner and probably Willy Rutgowsky), who were known as the evil Germans. Wendell would sneak up behind their opponents and wop them over the head with the army helmet he wore. On Aug. 8, 1973, the wrestling card at South Charleston Recreation Center in Charleston, West Virginia featured Dale Mann versus Wendell Burchett.

Some wrestking fans may remember Dale as "Billy Jack Mann" when he worked with "Dick the Bruiser's" Indiana promotion. That was a take on the Billy Jack movie character that was very popular in the late 70's.

Dale Mann died Tuesday, July 17th, at the age of 77. He had suffered a stroke a few weeks ago and had recently become bedridden. He had also suffered from diabetes and other illnesses in recent years.

RIP Dale Mann. Thanks for the memories and for being our hero in the wrestling ring.