Hope To The World, Future For All Time

On July 3, 1986, during opening ceremonies of the Statue of Liberty Centennial Celebration in New York, President Ronald Reagan said...."Call it mysticism if you will, I have always believed there was some divine providence that placed this great land here between the two great oceans, to be found by a special kind of people from every corner of the world, who had a special love for freedom and a special courage that enabled them to leave their own land, leave their friends and their countrymen, and come to this new and strange land to build a New World of peace and freedom and hope. Lincoln spoke about hope as he left the hometown he would never see again to take up the duties of the Presidency and bring America through a terrible Civil War. At each stop on his long train ride to Washington, the news grew worse: The Nation was dividing; his own life was in peril. On he pushed, undaunted. In Philadelphia he spoke in Independence Hall, where 85 years earlier the Declaration of Independence had been signed. He noted that much more had been achieved there than just independence from Great Britain. It was, he said, hope to the world, future for all time." 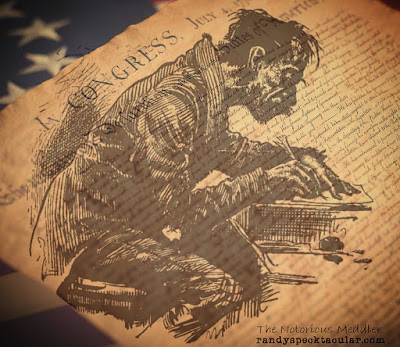