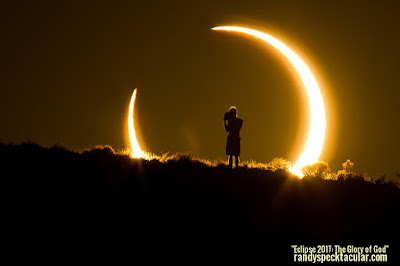 The ancient Chinese believed an eclipse was a fire-eating dragon that swallowed the sun. Medieval European Viking sailors attributed the celestial event to sky wandering wolves catching up with the burning orb.

In his online article published on August 20, 2017 entitled, "Are Solar Eclipses Proof of God?", Eric Metaxas of Fox News writes, "the man who wrote (Psalms 19:1) didn’t have a telescope or a Brittanica, but he saw something many today still do not see. He saw a God behind it all. It may be true that seeing a Grand Designer behind these breath-taking events requires what we call a leap of faith; but it may also be true that seeing mere coincidence behind them requires an even greater leap of faith. In my mind, much greater. Today, you may be the judge."

Seeing that the sun is a dependable friend that gives light and life, an eclipse could be viewed as a disruption of the natural order, but the eclipse will eventually end and God will continue to reign!