The Hunt For Freedom

Two decades before Abraham Lincoln issued his Emancipation Proclamation, Polly Berry, an African-American woman who had been enslaved as a child in Wayne County, Kentucky, became a free woman, thanks to the help of two former residents of Stockton's Valley, who were also members of Clear Fork Baptist Church.

Polly Berry, aka Polly Crockett and Polly Wash, was an African-American woman who was reportedly born to a slave in a Beatty family in Wayne County, Kentucky around 1803, and who later became enslaved to a one-armed man named Joseph Crockett, the uncle of frontiersman, Davy Crockett, who migrated from Fredericks County, Virginia to Wayne County, where he operated a sawmill. In the winter of 1818, when Polly was 14 years old, Crockett sold his property and moved his family, including Polly, to Illinois, seemingly with the intent of moving on to Missouri when weather allowed.

Illinois was a “free state” meaning that if a slave owner moved there, he forfeited his legal rights to own his slaves, but Crockett ignored this fact. His decision to winter there, with wife, belongings and stock, would become key to Polly's hunt for freedom, along with the fact that he hired her out to neighbors in the free state before allowing his son, William, to take her to the slave-state Missouri months later and sell her.

At Missouri, Polly was sold to Major Taylor Berry of St. Louis and became Polly Berry. It was there that she married another slave and two daughters were born: Nancy and Lucy. When Major Berry died there was a provision in his will saying that after his wife, Fanny, died the slaves would be freed.

Fanny married Missouri State Supreme Court Justices Robert Wash and when she died a few years later, Wash not only did not free his wife’s slaves as he was supposed to, he also sold Polly’s husband to a plantation owner in the South. Soon after, though, Major Berry's daughter's were able to reclaim Polly and her daughters from Wash.

Polly Berry escaped in 1839 after being sold to lumberman Joseph Magehan, but she was captured in Chicago and returned to get new owner. It was then that she resolved to protect her now 12-year-old daughter, Lucy Ann. Her daughter, Nancy, had managed to escape from slavery on the Underground Railroad. (She went on to marry a prosperous farmer in Toronto, Canada and had several children).

Polly filed a freedom suit in the St. Louis Circuit Court on October 3, 1839, on the basis that, when younger, she had been illegally held as a slave in Illinois (Polly Wash v. Joseph M. Magehan). A Missouri state law in 1824 stated that persons held in wrongful servitude could sue for freedom if they had evidence of wrongful enslavement. Most of the persons using this law to obtain freedom were enslaved Africans who based their wrongful enslavement cases on residence in a free state or territory. Since their cases were all brought for the same reason, collectively, they became known as "freedom suits." The judicial practice was termed, "once free, always free."

In 1800, Samuel Wood, his wife, Naomi, his mother, Sarah, and most of his brothers, migrated from East Tennessee to Stockton's Valley, Kentucky, which later became Albany. Samuel and his brother, William, helped organize Clear Fork Baptist Church. William served as clerk until his death in 1850 and Samuel was the first appointed deacon, serving until 1816. A road builder by trade, in 1813, he oversaw the building of the (old) Burkesville Road from Robert Davis’ to the county line. After the War of 1812 and an 1815 peace treaty with Northwest Indian tribes, rumors were rife of the rich soil in the Illinois Territory, causing Samuel, Naomi and others, including Joseph Crockett, to move there. Samuel and Naomi chose to settle near the Mississippi River at Troy.

The Wood's had been acquainted with young Polly and Joseph Crockett while living at Stockton's Valley and both gave key depositions on her behalf in April of 1840. Samuel referred to Polly as "the young Negro girl." Naomi went much further, saying she had known Polly "almost ever since she was born" and "frequently saw Polly's mother carrying the child about" and that Crockett would hire her out "even though she was sometimes a little sick." Naomi also stated that "when Polly was seven or eight years of age or thereabouts, she was sold by her original owners, the Beatty's of Wayne County, Kentucky, to Joseph Crockett, a one-armed man." She said, "I know the plaintiff (Polly) well. I have not seen the plaintiff since she was here with Crockett until something like a fortnight ago when she came to my house. She said that she had come to hunt us and after talking some time about the Beatty's and Crockett's and other neighbors and things I asked Pol where she had been all this time and why she had come here. She said she had come to see if they could say how long she had stayed here and said she had an idea of endeavoring to get her freedom. I then stated to her that I recollected such facts as I have stated and I told her I was willing to testify to such facts as I know here as at St. Louis."

Berry successfully proved that she had been enslaved in the free state of Illinois before being sold to a slave trader in Missouri and on June 6, 1843 an all-white jury in St. Louis declared her a free woman. Five years later, on February 7, 1844, the same court declared freedom for her now 14-year-old daughter, Lucy Ann, because she was born to a woman who was proven in court to be free based on having been held illegally in Illinois.

You can read about Polly Berry's life in her daughter's memoir, "From the Darkness Cometh the Light," or "Struggles for Freedom," the only first-person account of a freedom suit, published in 1891 under her married name, Lucy Delaney.

It's not clear when Polly Berry died but after the court cases, she lived with Lucy Ann the rest of her days. Lucy Ann died sometime after 1891.

Samuel and Naomi Wood and others organized Canteen Creek Baptist Church in the Jarvis Township of Madison County, Illinois on June 21,1817 and Samuel was called to preach. He died on May 20, 1850. Naomi reportedly died two years later. They are buried at Canteen Creek Church Cemetery, also known as Wood Cemetery. 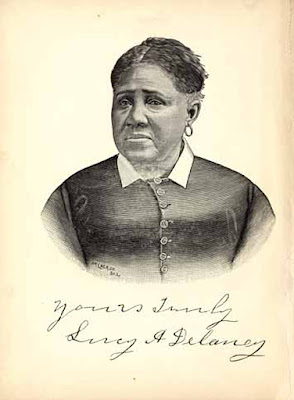