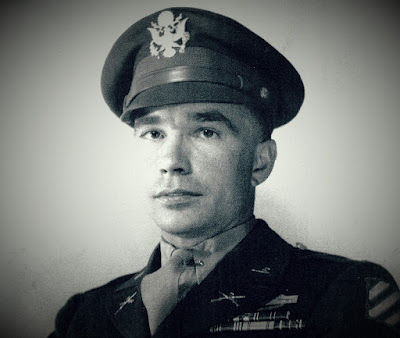 Garlin Murl Conner's bravery and heroism during World War II did not begin and end on January 24, 1945 near Houssen, France, which earned him the Distinguished Service Cross in 1945 and was upgraded to the Congressional Medal of Honor this past Tuesday, June 26, 2018.

The Albany, Kentucky did much more. In October of 1943, then-Sgt. Conner earned a Silver Star for an act of bravery that occured during a heavy enemy counter attack when he left the safety of a covered position to direct fire and place men in a gap in the line. These men, at the time, were separated from their own platoon and were under the heaviest of fire from the enemy who were attempting to infiltrate through our lines. Even though he was a Communication Sergeant at the time of the action, Sgt. Conner, on his own initiative and with utter disregard for personal safety, took control of the situation, giving orders and first aid to many of our wounded, who were unable to be evacuated at the moment.

On January 30, 1944, near Ponte Rotto, Italy, Tecnical Sergeant Conner earned a Bronze Oak Leaf Cluster in lieu of a Second Award of the Silver Star. At about 0200 hours, he stormed a strongly fortified house, leading an assault group which he had organized, and succeeded in clearing it. Held by enemy soldiers armed with machine guns and machine pistols, the house blocked an attack being made by Company K. Four men previously sent to capture it were wounded. Taking a bazooka team and two rifle grenadiers with him, Technical Sergeant Conner led the way across 50 yards of exposed terrain and openly directed such effective fire on t he enemy at 25 yards range that one machine gun and two machine pistols were silenced and the crew of a fourth automatic weapon was routed. As a result, Company K continued its advance unhindered.

On September 11, 1944, then 2nd. Lt. Garlin Murl Conner earned a Second Bronze Oak Leaf Cluster in lieu of a Third Award of the Silver Star. His fearless leadership under devastating enemy shell and small arms fire, resulted in the capture by his company of a road junction i southern France. Despite shells bursting within 10 yards of him, first hitting six men and later wounding three more, 2nd Lt. Conner continued advancing and inspiring his platoon to follow him until he was approximately 300 yards from the enemy. He then crawled forward alone for about 250 yards through mortar, machine gun and rifle fire that barely missed him, and observed the enemy's dispositions. Leading his platoon by a covered route to the rear of the enemy, he launched a surprise attack that knocked out a machine gun and two mortars, killed three of the enemy, captured seven, and forced the remainder to flee.

On February 3 1945, 1st Lt. Garlin Murl Conner earned a Third Bronze Oak Leaf Cluster in lieu of a Fourth Award of the Silver Star for gallantry in action against the enemt. At 1700 hours, in southern France, he assumed command of a badly battered and disorganized rifle company and led it in an assault over 200 yards of fire-swept ground. Despite bullets which barely missed him, 1st Lt. Conner dashed forward with such grim ferocity that the enemy's morale was shattered. Closing in hand-to-hand combat he led his assault elements in killing 12 and capturing 75 of the enemy, totally shattering enemy resistance in the town.

His awards and decorations include:

“Today we pay tribute to this Kentucky farm boy who stared down evil with the courage of a warrior and the heart of a true hero. [He] was indeed a giant in his daring, his devotion and his duty. He was larger than life." - President Donald J. Trump, June 26, 2018.