Living Past the Century Mark

Elizabeth Booher Parrigin, who lived in Clinton County, was born on Jan. 11, 1797. She lived to be 105 years of age was the oldest living person in Kentucky when she died.

Elizabeth was born in Sullivan County, Tennessee and moved to Clinton County in the fall of 1858. At the time of her death she was living with her great- grandson, Clinton County Judge C.B. Parrigin two miles north of Albany.

The unique thing about Elizabeth is that she lived in three different centuries and up to her death, under every president of the United States.

On Nov. 15, 1901, when she was 104 years and ten months old, the Green County Record reported that she could still recite many incidents from her childhood and was in fair health. 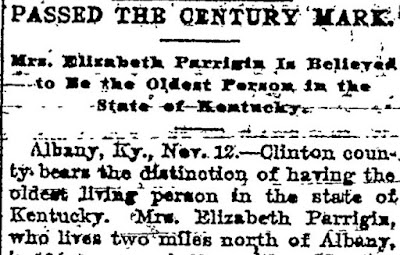