The Big Five Were Small in Stature, Big of Heart 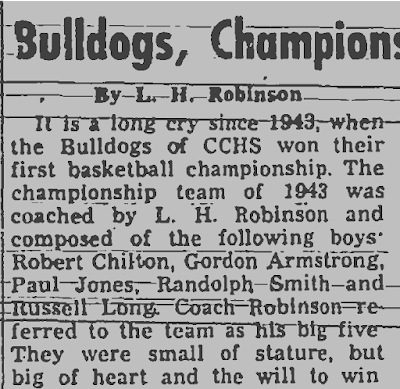 The date was Nov. 17, 1942. It was the middle of WWII. The basketball team at Albany High School had won four games and lost three and with only a handful of games left to play before district tournament first year head coach Raymond Reneau left the team, and Albany, for the U.S. Army and the war in Europe. Principal L.H. Robinson would have to coach the team the rest of the way.

Prof was no stranger to this challenge. While principal of Ewing High School in Fleming County, before coming here, he had also coached basketball. In fact, he coached the first team from Ewing to ever win a regional basketball tournament. So he took control of the Bulldogs team. They won the last three regular season games on the schedule and in the 38th district tournament, the Bulldogs swept past their two opponents, Marrowbone and Burkesville, and for the first time in the history of the school, a basketball had won the district tournament.

Marrowbone had a very strong team but they just couldn't do anything with the Bulldogs. The game started off with every spectator on his feet. Both teams played evenly in the first quarter, but it didn't take long for the Bulldogs to realize what the game meant to them. From then on, Marrowbone could only watch as the Albany boys went to town. The score was never again close. It was 9-to-6 at the end of the first quarter, 19 to 8 at halftime, 32 to 12 at the end of the third quarter and the final score was 41-to-21.

The Albany boys were a little tired at the start of the game against Burkesville, but they wound up playing very good ball, winning the game 49-to-23. Two players, Randolph Smith and Russell Long, were named to the all-tournament team and each received a gold basketball. The captain of the Bulldogs, Robert Chilton, received a very beautiful trophy on behalf of the team. Albany should feel proud that they have such a splendid basketball team.

The New Era newspaper wrote, "The team played exceptionally good ball, but they couldn't have played so good if it hadn't been for their very good coach, L.H. Robinson. Due respect should be paid Coach Robinson for his marvelous work with the boys." Coach Robinson referred to his team as 'the big five.' "They were small in stature, but big of heart and had the will to win," he said. The five starters were Smith at center, Gordon Armstrong and Paul Jones were the forwards and Chilton and Long were the guards. "Those boys ran set plays to perfection and their defense simply smothered the opposition," Coach Robinson said."

Albany lost to Tompkinsville by one point in the 5th region tournament at Glasgow. The following year, 1944, the Bulldogs repeated as champions of the 38th District, again under the leadership of L.H. Robinson. In his three seasons as head coach, Robinson's teams won 24 games and lost 13, two back to back district tournament championships and a district runner-up trophy in the third year.