I Hear That Train a-Coming 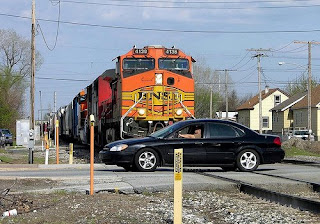 You know how sometimes things happen and you say to yourself, "I should have stayed in bed?" Well, that is how my brother, Mark, must have felt Monday morning as he was on his way to work in Somerset. Here is the rest of the story in his own words:

"I decided to take the new 'southern part' of the by-pass, which is only halfway done. I haven't been taking it cause it is a dangerous road with train tracks. I almost got to the end of the new road, where it changes to anther by-pass that leads to work and I-75. As I approached the train tracks, I noticed [the] flashing lights of police cars, fire trucks and an ambulance. On the other side of the tracks, [there] was a wreck. So, I went over the tracks then had to stop. I had to wait about 30 minutes for the ambulance to leave. In order for it to get out, I had to back up. I ended up right in the middle of the railroad track. Right at that moment, the train warning lights came on and then I heard the whistle. I looked to my right and saw nothing. As I looked to my left, I saw my worst nightmare coming true. Around the bend, came the train barreling toward me. I was stuck with cars behind me and the ambulance in front of me. You can imagine the panic I felt. Seconds seemed like minutes and then, finally, the ambulance driver realized what was about to happen and floored it. Just as I was pulled off the track, I looked in my rearview mirror and saw the train going by. As soon as I made it to the by-pass, I pulled over and started throwing up. Needless to say I didn't make it to work. As for the train tracks....I won't be going that way again."