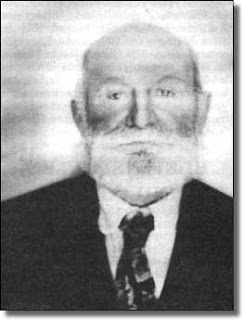 Nowadays, we have movie stars and sports stars to name our children after, but back in the early days when America was being formed, what proud parent wouldn't have wanted to name their child after a war hero, or someone who had blazed a trail to help get this country started?

Abraham Lincoln Boles, better known as 'Link,' pictured above, attended the Alpine Institute of higher learning in Overton County, Tennessee, floated logs down river from the virgin forests and even worked for a railroad company. Later in life, he sported a long, white beard and mustache, but had very little hair on top of his head. Some kids thought he was Santa Claus!

It is true that George Washington Boles supported President Abraham Lincoln. In the 1935 Clinton Co. Homecoming and Centennial Celebration souvenir program, George was recognized as being a veteran of the Civil War. His uncle was Tinker Dave Beaty, and George and his father, Captain John Boles, were members of Tinker Dave's independent scouts, who protected Fentress County from Confederate guerillas like Champ Ferguson. In the program, George was quoted as saying "I always made the Rebels run!" He also said he 'remembers voting for Abraham Lincoln for President!'

Oh, I almost forgot.......George's home in Albany later became Maple Hill Hospital, the place where I was born!

George Washington Boles, left, and his nephew, Abraham Lincoln Boles, pictured here in their earlier days. George died on February 5, 1941, while Link passed away on December 12, 1954.

*Note: Thanks to my cousin, Jo Ann Shoemaker, for supplying the photos and background information for Link Boles. If I hadn't started this blog, I would have never met her.