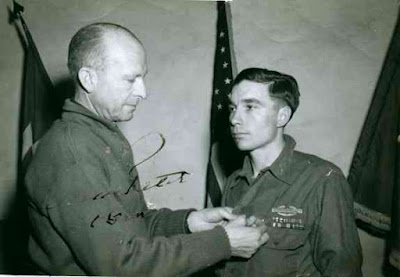 I heard President Obama talk about righting wrongs. On this anniversary of D-Day, I know of one wrong the President can right: Award a Medal of Honor posthumously to First Lieutenant Murl Conner.

On January 8, 2003, Kentucky Congressman Ed Whitfield introduced H.R. 327 in the 108th Congress, authorizing the President to award a Medal of Honor posthumously to Lieutenant Conner. It's yet to be done.

Murl was a native of Clinton County, who served with distinction and valor in the United States Army during World War II. He is Kentucky's most decorated war hero, who served on the front lines for over eight hundred days in eight major campaigns. He was wounded seven times but returned to combat and continued to fight on the front lines after each wound.

On January 24, 1945 at 0800 hours, near Houssen, France, Lt. Murl Conner ran 400 yards, through the impact area of an intense concentration of enemy artillery fire, to direct friendly artillery on a force of six Mark VI tanks and tank destroyers, followed by 600 fanatical German infantrymen, which was assaulting in full fury the spearhead position held by his battalion. Along the way, he unreeled a spool of telephone wire, disregarded shells which exploded 25 yards from him and set up an observation post which he manned for more than three hours during the intense fighting. He was individually credited with stopping more than 150 Germans, destroying all the tanks and completely disintegrating the powerful enemy assault force and preventing heavy loss of life in his own outfit.

Murl Conner served in the same 3rd Infantry Division as Audie L. Murphy, recognized as America's most decorated hero of all wars. But, comparing Murphy's record, Lieutenant Conner was awarded more Silver Stars for acts of valor, fought in more campaigns, served on the front lines longer, and was wounded more times. He was awarded the Distinguished Service Cross, the Silver Star with three Oak Leaf Clusters, the Bronze Star, the Purple Heart with six Oak Leaf Clusters, among other medals. On June 20, 1945, Lieutenant Conner was awarded the Croix de Guerre, the French Medal of Honor, which was also awarded to Sergeant Alvin C. York, America's most decorated World War I soldier, who was a friend of Lieutenant Conner and lived a few miles from Lieutenant Conner's home on the Kentucky-Tennessee border.

Before he died, the late Major General Lloyd B. Ramsey, who was Lieutenant Conner's battalion commander during combat in World War II, signed the necessary documents for awarding the Medal of Honor to Lieutenant Conner. After Conner was discharged, the major general wrote

"I just sent one of my officers home. He was my S-2 (Intelligence Officer), Lt. Garlin M. Conner, who is from Aaron, Kentucky. I'm really proud of Lt. Conner. He probably will call you and, if he does, he may not sound like a soldier, will sound like any good old country boy, but, to my way of seeing, he's one of the outstanding soldiers of this war, if not THE outstanding...I've never seen a man with as much courage and ability as he has. I usually don't brag much on my officers but, this is one officer nobody could brag enough about and do him justice. He's a real soldier."

Murl was never awarded the Medal of Honor due to an oversight and failure to process the paperwork. The Medal of Honor would give Murl one more award than Audie Murphy, thus making HIM America's most decorated hero of all wars. Right this wrong, Mr. President. It's long overdue. Honor and recognize Lieutenant Garlin Murl Conner for what he is -- one of the great combat heroes of World War II.