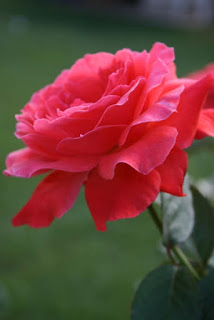 It's Friday. My day started off slow at first, but when I arrived at work and signed into Facebook, things began to change.

The first thing I saw on my Facebook page was a note by my friend, Charley Neal. You see a lot of her photography work in my stories. No only is she a great photographer, she's an exceptional person.


This morning, she wrote, "Friday is such a sweet little word." For someone who doesn't have to work weekends, I say 'thanks for that simple reminder Charley Neal.'

By the way....Photo by Charley Neal.

Then, I scrolled down a bit further and saw an awesome new photo of my dear friend, Kelly -- a GREAT way to start my day! There was a second photo of Kelly and her brand new nephew, Colter Boone, whom she is truly, and very understandably, obsessed with. Hanging out in 'Boonetown' has become her most favorite thing to do!

As I left Kelly and her new photos, I scrolled down and found a message by my new friend, Robin Milby. The words he had written were powerful. Talking about Jesus coming down from Heaven to live on earth, he said, "He could have come down and ridden in chariots. He was the ultimate King, you know. He could have chosen Pharisees and scribes to be His disciples. He chose fishermen. He chose the common man. He chose you. He came down and lived among ordinary men, and He Himself wore no robes or crowns."

After I read that, I thought about how He could not have come at all, but God saw ME. I don't understand why I should matter, knowing me as I do, but I just know that because He did, the least I can do is serve Him!

And then, on my radio station, came this song:

Than to be a king of a vast domain
Or be held in sin’s dread sway,
I’d rather have Jesus than anything
This world affords today.

Bev Shea left the words to this 1922 poem by Rhea Miller on her sons piano bench. She wanted him to find it, read it and then set it to music, and hopefully change the course of his life. It worked. George Beverly Shea sang the song at Church the following day, and then he sang it around the world the rest of his life.

He’s fairer than lilies of rarest bloom;
He’s sweeter than honey from out of the comb;
He’s all that my hungering spirit needs,
I’d rather have Jesus and let Him lead.

I have been missing the kids being gone all week (with another week still to go through). I needed this start to my day today.