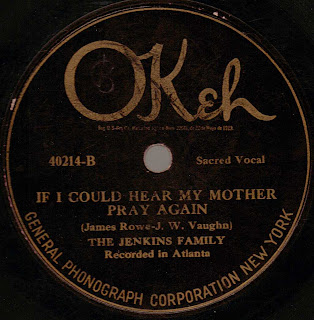 Rev. Andrew Jenkins was born in 1885, just outside Atlanta. He was left partially blind by a mis-prescribed medication while still an infant. Early on, he exhibited remarkable musical talents and was able to play by ear almost any instrument he picked up. Jenkins, who also showed a proficiency for writing songs, saw his musical abilities as a gift from God.

Besides his musical talents, Andrew was skilled in other ways. At the age of nine, he began preaching to playmates from porches and tree stumps. He became a licensed Methodist preacher around the age of 21 and moved into the city, supplementing whatever he could earn from preaching and street performing by running a newspaper stand.

After his first wife's death, Jenkins married Francis Eskew in 1919. A young widow, his new wife had three musically talented children; Irene, Mary Lee and a son, T.P. Thus, was born the Jenkins Family, which became one of the most popular family acts of its day and considered to be the first family act to record country music.

In 1922, the Jenkins Family performed their first program on Atlanta radio station WSB, with Andrew Jenkins billed as "the blind newsboy evangelist." The station had a signal that reached coast-to-coast. Performing folk, country and light classical material, the Jenkins Family was an immediate success and remained with the station for nearly a decade. Their popularity, which reached to Canada and Mexico, also attracted the attention of the major record label, Okeh (pronounced OKAY) Records, for whom they made their debut recordings in 1924, three years before the Carter Family began recording.

The Jenkins Family's initial releases were not originals, but were successful enough to earn the group another recording session, where they recorded four of Rev. Jenkins' songs, including two gospel numbers. Jenkins was soon asked to write songs for the label's other artists, and his first effort, "The Death of Floyd Collins," took just 45 minutes to complete. While the song sold poorly for Okeh, it was picked up by Columbia Records, which hired Vernon Dalhart, one of the era's leading singers, to record it. The Dalhart version eventually sold more than 300,000 copies. Besides being one of the all-time best-selling country music 78's, the song set a sales record for Columbia that stood for many years.

Jenkins earned very little from the songs he wrote. The hit, "The Death of Floyd Collins," for example, brought him just $25, and under his agreement with the producer he was working with at Okeh, he also gave up all rights to the song.

After experiencing copyright problems, Jenkins began keeping meticulous records of his songs. The practice eventually paid off. Years later, after Mahalia Jackson recorded one of his gospel songs, "God Put A Rainbow In The Sky," his step-daughter, Irene, was able to prove the song was not in the public domain but rather Jenkins' composition.

The Jenkins Family popularity opened Rev. Jenkins' ministry to a wide audience, as they performed concerts and organized revival meetings throughout Georgia. Over time, Jenkins also served as pastor of several churches. In 1939, he lost his eyesight completely, yet he continued to preach up until the time of his death due to an automobile accident in 1957.

Rev. Andrew Jenkins is credited with writing more than 800 songs. He was, without a doubt, among the most important composers of his time.