The First Family Of Country Music 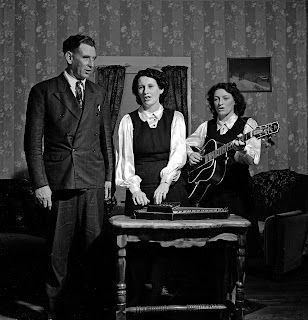 On the first day of August in 1927, A.P. Carter persuaded his wife, Sara, and his sister-in-law (and Sara's cousin), Maybelle, to drive to Bristol, Tennessee and audition for Ralph Peer of Victor Records, who was scouting for talent. They recorded six tracks in two days ($50 for each song they recorded), including The Poor Orphan Child, The Wandering Boy, Single Girl Married Girl and The Storms Are On The Ocean, all of which are in my record collection.

Immediately after that first recording session, Victor released a 78 r.p.m. record of The Carter Family performing Wandering Boy and Poor Orphan Child. A year later, another record was released with The Storms Are On The Ocean and Single Girl Married Girl.

On May 27, 1928, the group traveled to the Victor Camden, New Jersey studios, where they recorded many of what would become legendary signature songs, including Keep On The Sunny Side, Can The Circle Be Unbroken and Wildwood Flower.

A.P., Sara and Maybelle were all born and raised in southwestern Virginia, where they were immersed in the tight harmonies of mountain gospel music and shape note singing. Sara sang lead and Maybelle sang harmony and played guitar. On some songs, A.P. did not perform at all. At other times, he would sing harmony and occasionally, lead vocal.

The Carter Family's music had a profound impact on folk, bluegrass, country, southern gospel, pop and rock musicians. But, the family's repertoire of songs wasn't the only thing important to music at the time. So was Maybelle's guitar playing. She would play the melody line on the lower strings with her thumb, while at the same time, maintaining the rhythm of the song by brushing her other fingers across the higher strings.

By the end of the 1930's, the Carter Family had sold over 300,000 records. Their career predated any sort of best-selling chart of country music records. (Billboard did not have a country best-sellers chart until 1944.)

By 1936, A.P. and Sara's marriage had dissolved. The group officially disbanded in 1944, although they continued to make records through 1956.

Soon after the group disbanded, Maybelle began performing with her daughters; Helen, June and Anita, as the Carter Sisters and also the Carter Family. Maybelle became affectionately known as Mother Maybelle.

Maybelle and Sara briefly reunited, recorded a reunion album and toured in the 1960's during the height of folk music's popularity.

Today, The Carter Family is referred to as the First Family of Country Music.
at August 18, 2012