The first major record label Buddy Holly recorded for was Decca Records in Nashville. The Decca recordings failed to produce a hit single, but after Buddy had some success with recordings on the Brunswick and Coral labels, Decca decided to package the 1956 tunes into an album. That'll Be The Day was the third and final studio album released before Buddy Holly's death on February 3, 1959. Recorded January 26, July 22 and November 15, 1956 at Bradley Film and Recording Studios, 804 16th Ave. So., Nashville, Tennessee, the album was released in April of 1958, ten months before Buddy's death. 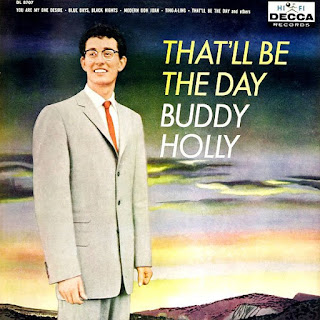 "That'll Be The Day (Decca, 1958)"
(Side 1) You Are My One Desire, Blue Days Black Nights, Modern Don Juan, Rock Around With Ollie Vee, Ting A Ling and Girl On My Mind. (Side 2) That'll Be the Day (July 22 version), Love Me, I’m Changing All Those Changes, Don’t Come Back Knockin’ and Midnight Shift.

About the first of December, Crandall wrote to “Pappy” Dave Stone, radio station KDAV manager, asking for exclusive rights to help Buddy obtain a recording contract. He needed a recording of four original songs. On December 7th, Buddy, Don Guess and Jerry Allison drove to Wichita Falls to record at Nesman Recording Studio. The four songs: Love Me, Don’t Come Back Knockin’, Moonlight Baby, and I Guess I Was Just A Fool were submitted on acetate to Decca.

Around January 23, 1956, Buddy negotiated a recording contract with Decca and a three-year songwriter’s contract with Cedarwood Publishing Company. The first session on January 26th in Nashville included Buddy, Sonny Curtis and Don Guess under the name, Buddy and the Two Tones. They and the Nashville musicians recorded four songs: Blue Days, Black Nights, Don’t Come Back Knockin’, Love Me and Midnight Shift.


~
Buddy's legal name was Charles Hardin Holley. On February 8th, he received Decca’s contract from Jim Denny of Cedarwood Publishing. Someone had inadvertently left out the E in his last name. As a result, Buddy adopted the Holly spelling for his last name.

On July 22, 1956 Holly, Curtis, Guess, and Jerry Allison went to Nashville for the second Decca recording session. The songs that were recorded were I’m Changing All Those Changes, Girl On My Mind, Rock Around With Ollie Vee, Ting-A-Ling and a slowed-down version That’ll Be The Day, which was also four steps higher than the later hit record released on Brunswick. Buddy detested the Decca version.

On November 15th, Buddy returned to Nashville for the third and final recording session with Decca. Rock Around With Ollie Vee, Modern Don Juan and You Are My One Desire were recorded.


~
On January 22, 1957, Decca informed Buddy that his renewal option was not going to be exercised and that his contract would expire on January 26, 1957. On February 24th and 25th, Buddy traveled to the Norman Petty Studio in Clovis, New Mexico and recorded I’m Looking For Someone To Love and what would become the hit version of That’ll Be The Day. Besides Holly, the other players were Larry Welborn on bass, Allison on drums and Niki Sullivan, Gary Tollett and Ramona Tollett singing sing background vocals on That’ll Be The Day.

Afterwards, Buddy found out he was restricted from recording any of the songs that were done under his contract with Decca. A name, other than Buddy Holly, would be needed in order to release the new version of That’ll Be The Day. Buddy's group considered briefly, then discarded The Beetles before selecting The Crickets.


~
Norman Petty was able to secure a record deal for The Crickets with Brunswick Records and a record deal for Buddy Holly as a solo artist with Coral Records. Buddy knew Norman Petty's recording of That'll Be the Day was special. He sold the future hit to Brunswick and when Decca got wind of it, they tried to sue Brunswick before realizing they owned Brunswick. They also found out they owned Coral as well.

Over the next month, the make up of The Crickets came together as: Buddy Holly, vocals and lead guitar; Jerry Allison, drums; Joe Mauldin, bass; and Niki Sullivan, rhythm guitar. After Buddy was killed, his eventual replacement became Sonny Curtis, who still sings lead for the Crickets today. 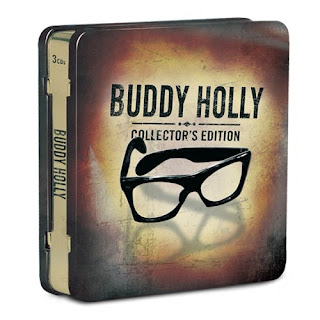 Buddy Holly "The Collector's Edition," is a 3-CD package that comes with a booklet that tells much of the history of Buddy Holly. It comes in an attractive collectors tin box. The last CD is a reissue of the MCA release of the Decca recordings, minus Ting-A-Ling. It's what I have been listening to lately. All of the recordings are great, with the exception of the slowed-down higher-pitched version of That'll Be The Day.


~
This 1967 release, "The Great Buddy Holly," on Vocalion Records is a collection of the Decca recordings, minus Ting-A-Ling. 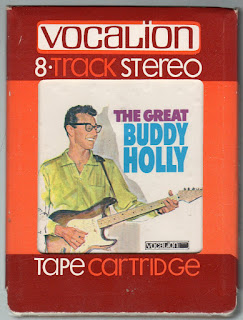 ~
This 1982 release, "The Great Buddy Holly," on MCA Records is a reissue of the 1967 Vocalion Records release of the Decca recordings, minus Ting-A-Ling. 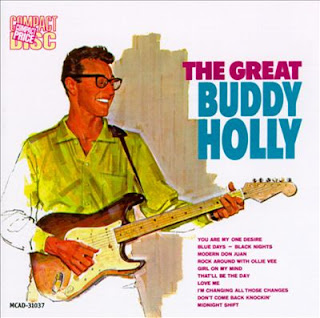