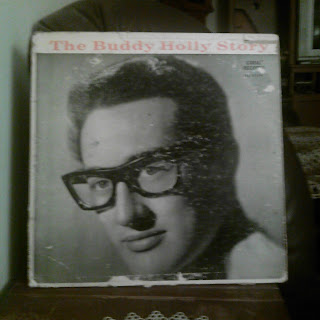 For me, every day is a Buddy Holly day, not just on Feb. 3rd, the anniversary of the day the music died. I've been a Buddy 'Holly-ic' as long as I can remember. In 1990, I found and purchased "The Complete Buddy Holly," a $100 valued set of the entire discography, for $20 at a Somerset pawn shop.

Since then, I have been able to secure the autographs of the remaining Crickets as well as the real Peggy Sue, who sent me a copy of her book. Tommy Allsup, the session guitarist on many of Buddy's recordings, was on that ill-fated 1959 tour. He was supposed to be on the plane with Buddy but Ritchie Valens, who was sick, won a coin toss and boarded the plane instead. In 1990, Allsup came to Burkesville, along with Nashville session fiddle player, Buddy Spicher, and performed at a barbecue put on by the late Tom Parkman. Lucky for me, I was friends with Parkman so I was invited to attend his party. While there, I took a picture of Tommy Allsup and got his autograph. When I mentioned I was a Buddy Holly fanatic, he just lowered his head and did not reply. The only Buddy Holly-related autograph I was never able to get was Crickets guitarist Niki Sullivan and Waylon Jennings, who was also on the 1959 tour as Buddy's bass player.

Buddy Holly's music was fresh and energetic. Buddy knew how to arrange. Vie Petty's piano playing on those songs is amazing and, of course, Buddy Holly was a phenomenal guitarist. Buddy Holly greatly influenced the Beatles, Bob Dylan and the Rolling Stones. Buddy once said, "Without Elvis, none of us would be here." In the mid 70's, before his own death, Elvis said, "Looking back over the last 20 years, I guess the guy I've admired most in rock and roll is Buddy Holly." Now, that's respect. On January 31, 1959, Robert Zimmerman, the future Bob Dylan, went to see Buddy Holly perform at the Duluth, Minnesota National Guard Armory. Three days later, Buddy was killed. Accepting a Grammy for Album of the Year for Time Out Of Mind in 1998, Dylan said: "When I was sixteen or seventeen years old, I went to see Buddy Holly play at Duluth National Guard Armory and I was three feet away from him…and he looked at me. And I just have some sort of feeling that he was — I don't know how or why — but I know he was with us all the time we were making this record in some kind of way."

Here is a nice 'local' connection to Buddy Holly. Sonny West wrote two of the Crickets' hits: Rave On and Oh Boy. In 1960, he started frequenting Mike's 66 Bar on Route 66 in Grants, New Mexico. The reason was a guitar player by the name of George Hudson. George was my dads guitar playing partner and friend. Every year at this time I try to write something about Buddy Holly, to help bring some awareness of Buddy Holly to my little corner of the world. It's not so much about the day the music died as it is about the man who took rock and roll to a whole other level. In his book, "Rock 'n' Roll: The 100 Best Singles," Paul Williams wrote, "It only fully became rock and roll when Buddy Holly started singing it."

"Memories will follow me forever, Tho' I know our dreams cannot come true, All those precious things we shared together, Time goes by, I'll still remember you" (from Buddy's song, That Makes It Tough).