Randy To The Rescue 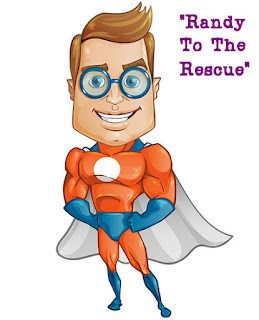 I grew up in a radio broadcasting family. I was breastfed by a microphone. My first babysitter was an AM transmitter. My first words were Conway and Loretta. My l first lesson about life was when Roger Miller sang, "You Can't Roller Skate In A Buffalo Herd." I had a radio license before I had a drivers license. My paint by numbers numbers were 45, 78, 33 1/3rd.

I was very gung go in the early days. I chased fire trucks and ambulances trying to be the ace reporter that I surely I was destined to be. All of that came to an abrupt end one cold dark winters night about 1983. My town was very small. We only had one stoplight and on that particular night, there was only one city police officer on duty and no dispatcher. It was just after midnight. There was a snow on the ground and the temperature was near freezing. I was at the radio station typing some news, when all of a sudden the scanner came alive with the voice of our only on-duty city police officer. He was requesting assistance from someone, anyone...but, there was no one. I sat there listening, waiting for someone to reply, but not an answer came. He made a few attempts.....still no replies. Then, he tried summoning help from the neighboring counties, but again.....nothing.

I know other officers were out there somewhere, but no one was responding. I figured the winter weather must have been the reason that he was not being heard. So.....I leaped to my feet, grabbed my overcoat and into the night I went. Suddenly, I was a superhero, a Dick Tracy. Instead of going to the police station and dispatching, which I probably should have done, even though I wasn't a dispatcher, I drove directly to where the officer had said he was, which was just a couple of miles north of the town square, where the city police station was.

I pulled directly up to the front of the police car, jumped out and asked the officer if he needed help. Our only on-duty officer had pulled over a large two ton flat bed truck that he said was loaded with stolen merchandise. He asked me if I could drive a straight shift. Well, I had never been in such a contraption much less drive one. Plus, up to that night, I had never driven a straight shift. I told him that I could not drive it. The next words out of his mouth solidified the assumption in my mind that I could be a broadcaster by day and a superhero by night, like Superman.

Imagine that. Me, a superhero. I was ready to take an oath or whatever is was that promising superheroes were supposed to do at a time like this.

I moved my car out of the way and climbed behind the wheel of the police car as the officer climbed up into the truck carrying the stolen merchandise. He radioed me to proceed to the jail. Without even stopping to think about it, I grabbed the mic and said, "10-4!" Haha, I said, "10-4" on the police radio. Watching all of those Adam 12 episodes was going to pay off!

And then, it happened. As I released the mic and placed it back on its holder, one of the prisoners in the back seat said, "Hey, you're that guy on the radio!" I almost lied and said no, but I couldn't. "Yes," I said. The man went on to say that he listens to me all the time. But, he really got me by saying "Man, you play great music!"

What had I done??? I was so intent on being a superhero by night, a Dick Tracy, and here was this man, a lowly thief, saying he loved my music!! The rest of the two miles to the jail, I spent agonizing my decision on that cold wintry night. Being just a disc jockey was good enough for me. It was more than good enough. When we got to the jail, I said something about the prisoners not really being such bad guys. The officer just looked at me as he marched them inside to be locked up. He told me to catch a ride back to my car.

"A heel!" That's what I kept calling myself as I drove home that morning. I never chased another fire truck or ambulance again. My crime-fighting days were over before they ever began. But, I wasn't complaining.