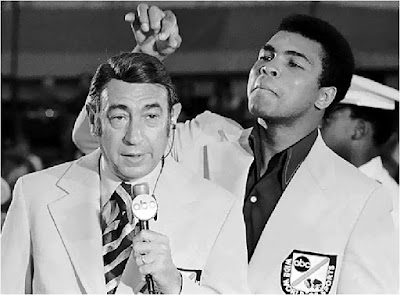 I recently wrote a series of stories entitled, "Sports Announcers I Grew Up With." On March 15th of this year, I paid tribute to the late Howard Cosell. His style of hard news-like reporting transformed sports broadcasting. His distinctive voice, accent, cadence, etc. were a form of color commentary all their own. He admitted being arrogant, among other things, and he wore a toupee. Those things were all Muhammad Ali needed to rib Cosell. Ali loved to tease Cosell about his toupee and always threatened to remove it from Cosell's head. Of course, Cosell never let him do it.

According to sportswriter Dave Kindred, the relationship between Ali and Cosell made for some of the best theater in American sports. Whether the pair were discussing an upcoming title fight or the state of modern society, their conversations always sizzled.

In Kindred's "Sound and Fury: Two Powerful Lives, One Fateful Friendship," he wrote the following:

"They should never have met. Ali and Cosell lived in parallel worlds, separated by the sociological barriers of age, race, religion, education, and geography. But greater forces were at work. For most of twenty years, the fighter and the broadcaster appeared together on national television so many times that they became a de facto comedy team, Ali & Cosell."

"The fighter forever titillated spectators with pantomimed threats to lift the broadcaster's hairpiece and once said, "Cosell, you're a phony, and that thing on your head comes from the tail of a pony." To a Cosell scolding of "You're being extremely truculent," the defiant child Ali replied, "Whatever 'truculent' means, if that's good, I'm that."

"It made Ali & Cosell must-see TV. At the dawn of television's dominance of popular culture, they were both the creators and beneficiaries of sudden fame never before available. Both profited from the work, for without Ali engaging his liberal social conscience, Cosell would never have found his truest voice; and without the embrace of Cosell and the American Broadcasting Company when other networks wanted nothing to do with him, Ali could have been dismissed as a cultural-fringe aberration."

"Only the rare journalist stood with him, though, and only Cosell did it on national TV. Cosell defended Ali's right to his religion, his right to oppose induction into the army, and his right to work while appealing his conviction for refusing the draft. He did it at the risk of his reputation and his livelihood in a business — television — not famous for principled stands that might offend advertisers. He did it, too, Cosell often said, despite thousands of hate letters he received."

"Ali & Cosell worked because the men brought...to their television audiences, love and hate, racism and tolerance, fear and courage, idealism and compromise. Cosell loved Ali, the rebel with a belief, and Ali loved Cosell, the cranky old white guy brave enough to stand with him in the storm.

"One was Beauty, one was the Beast, and we never quite knew which was which." 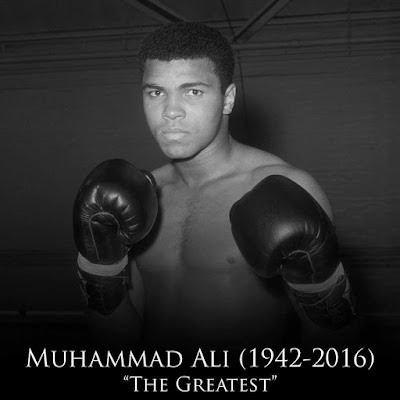