"I needed to hear this today," she wrote on Facebook, and then proceeded to write the lyrics to a song I had composed five years earlier.

He walks with me and He talks with me
And He tells me that I'm his very own
He died for me on Mount Calvary
That by his blood I might be made whole
God is able
Yeah yeah, God is able"
I wrote this in 2011 following an instance where I was confronted with the phrase, "God is able." I remember posting the words on Facebook, but I don't know how she would have come across them five years later, unless she had shared it on her page. I prefer to think that it had to be the Lord.

I have learned that what we share on social media matters, as in this case. That is why I try to be uplifting.

"If I can help somebody as I pass along
If I can cheer somebody with a word or song
If I can show somebody he is traveling wrong
Then my living shall not be in vain."

In my life, I strive to do as this songs says. So should anyone else who is interested in helping mankind. I have a radio friend in Indiana, a child from the "Peace and Love" generation of the 1960's, who once asked me, "What about that "GOD" thing?" I told her how God is able and I shared with her the same exact testimony I just shared with the lady who posted my lyrics on her Facebook page. It is the same testimony I am about to share with you.

The phrase, "God is Able," was something that I needed to hear back in 2003 when I was first diagnosed with Cardiomyopathy and was told my name would be the list for a heart transplant. My dad had died two weeks prior and I had three small children, the oldest being nine years old. In my darkest moment, lying there alone, weeping in that hospital bed, a lady, not a nurse, just someone who smiled at me, came into my room and handed me an envelope and then turned around and left. Inside the envelope was a card and inside the card were the words, "God is able." Ten minutes later, my phone rang. It was a close friend, a judge, who felt led to call and say to me that God is able to do all things. We both wept, I the more after all that had transpired in that hospital room within a matter of minutes. My name was taken off the transplant list the next day.

Those were not the only times that I have been confronted with the phrase, "God is able." I had read a conversation between two of my Overton County cousins. One was talking about how hard life is. The other replied that she would be to her like Aaron and Hur in Exodus 17, where Moses realized that the Israelites prevailed in battle while his hands were raised but lost ground when his hands were lowered. I googled the phrase, "life is hard," which led me to Dr. Martin Luther King, Jr.'s "Eulogy of the Martyred Children," on Sept. 18, 1963. It was delivered at the funeral service for 3 of the 4 girls who were killed in the bombing of the 16th Street Baptist Church in Birmingham, Alabama three days earlier.

"Now I say to you in conclusion, life is hard, at times as hard as crucible steel. It has its bleak and difficult moments. Like the ever-flowing waters of the river, life has its moments of drought and its moments of flood. Like the ever-changing cycle of the seasons, life has the soothing warmth of its summers and the piercing chill of its winters. And if one will hold on, he will discover that God walks with him and that GOD IS ABLE to lift you from the fatigue of despair to the buoyancy of hope, and transform dark and desolate valleys into sunlit paths of inner peace."

I am confirmly convinced that God wants me to know that He is able, as the bible says, "to do exceeding abundantly above all that we ask or think, according to the power that worketh in us." (Ephesians 3:20). "God is able" has become my motto. The lady on Facebook said, "I needed to hear this today." If I need to hear it daily, that is fine by me. 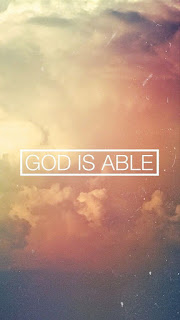