Alvin C. York Was a Hero 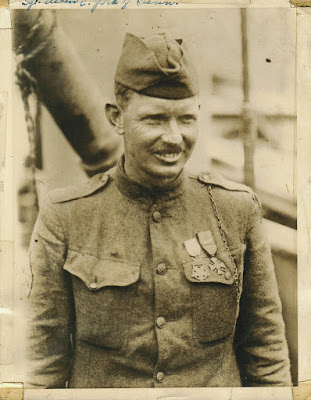 Friday marked the 100th anniversary (April 6, 1917) of the day the United States joined its allies to fight in the war to end all wars.

Alvin York of Pall Mall, one of the biggest heroes of World War I, registered for the draft two months later.

But, five months later, he was drafted, refusing to sign the documents that would have released him from military service. He wrote in his diary that both his company and battalion commanders persuaded him to fight, citing several Biblical passages about morality in war.

He ended up serving with his unit in the St. Mihiel offensive in northeastern France in September 1918. The attack weakened German forces in northern France and set the stage for attacks in the Argonne Forest and eventually Chatel-Chéhéry.

It would be where Alvin C. York became a hero.

On Oct. 8, 1918, his battalion moved to capture German positions near a railway. York's sergeant ordered him, along with three other non-commissioned officers and 13 privates, to infiltrate the German lines and take out their machine guns.

They moved behind the Germans and overran their headquarters, capturing a group who were planning to attack American troops. Machine-gun fire broke out as the American soldiers processed their new prisoners, killing six and wounding three.

According to his diary, York counter-attacked by taking charge of the remaining seven soldiers.

He wrote the excerpts:

"You never heard such a racket in all of your life. I didn't have time to dodge behind a tree or dive into the brush....

(1) As soon as the machine guns opened fire on me, I began to exchange shots with them. There were over 30 of them in continuous action, and all I could do was touch the Germans off just as fast as I could. (2) I was sharp shooting....all the time I kept yelling at them to come down.. (3) I didn't want to kill any more than I had to. But it was they or I. And I was giving them the best I had."

York ran out of rifle ammunition just as six German soldiers charged him with fixed bayonets, so he switched to his sidearm, an M1911 pistol, and shot each of them before they could reach him.

What he did that day was silence a German battalion of 35 machine guns, kill 25 enemy soldiers and capture 132. For his heroics, he received more than 50 decorations, was promoted to sergeant and awarded the Medal of Honor, the highest and most prestigious personal American military decoration.