The Tornado at Beaty Swamps 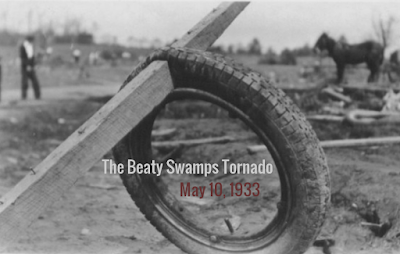 Shortly after midnight on Wednesday, May 10, 1933, Beatty Swamps, TN ( also known as Bethsaida), a small rural community located in Overton County, Tennessee, approximately 6.7 miles from Livingston, was struck by an F4 tornado that completely devastated the community. The funnel, anywhere from one-half to three-quarters of a mile wide, destroyed every home in the community, and killed or injured virtually every single resident. Much of the area was swept clean of debris. This is the second deadliest tornado ever to strike Middle Tennessee.

There have been tornadoes that have gained greater notoriety, such as the Super Outbreak of April 3, 1974, but never has a tornado affected a community as completely as the one that struck Beatty Swamps.

According to the National Weather Service, it had been a humid evening in the rural Cumberland Plateau community. In nearby Allardt, the temperature that Tuesday afternoon had climaxed at 82 degrees, a warmer-than-normal reading for early May. Haze was said to be thick, and "the storm was preceeded by a flashing electrical storm and a high wind," wrote correspondent Samuel K. Neal in the Livingston Enterprise newspaper.

"This little mountain settlement bore the brunt of Tuesday night's storm when it climaxed into a tornado early Wednesday morning, leaving more than a score dead and as many or more injured," he wrote.

The tornado struck with terrible suddenness. Beginning at Eagle Creek, northwest of Bethsaida, the twister moved in a zig-zag line three-quarters of a mile wide, spent its fury here, and ended near West Fork, a distance of about eleven miles from its beginning. In its wake it left the worst destruction this section of Tennessee has ever seen.

Neal wrote, "While natives of this vicinity, two miles East of Monroe, searched the wooded hills of eastern Overton County for other bodies, residents predicted more deaths would be registered by the week-end. It will be impossible to make an accurate check of the death toll for some days, on account of the inaccessibility of the region."

Houses were torn down wholesale. Barns with their contents, including farm machinery, were swept away as if they had been match boxes. A farmer's binder was blown from his barn to a field 500 yards distant, and was left a worthless scrap of twisted iron. A new automobile was swept along for hundreds of feet and left a wrecked mass.

The horror of the storm was emphasized by the broken, twisted, torn bodies lying in a morgue at the Blount Funeral Home in Livingston. The most touching scene of all was the family of Eunice Cole, man, wife, and seven children, ranging in age from two to fourteen. All were killed, probably in their sleep. They were found near their home site in their night clothes, their bodies covered with grime and scraps of debris.

"More horrible was the manner in which some of the bodies were found," wrote Neal. "Their bones broken into an incongruous mass, and on two, body parts were missing."

But most peculiar of all was at the home of Will Crawford, whose house was blown away, as were all his outhouses and his barn. "In his chicken house," wrote Neal, "two hens were setting, and they were found this morning complacently perched in their nests under a pile of debris, busily hatching their eggs, oblivious to the destruction around them."

The Ewing Hull cabin was blown away that night. The family woke up on the ground.

A few days later, coffins for the Una Cole family - nine in all - lined up for burial in a neighbor's yard near the cemetery. The entire family was buried in a mass grave under one tombstone.

Ultimately, the tornado at Beaty Swamps caused 33 fatalities and $100,000 in damages. Adjusted for inflation, that would be $1.87 million in damages in 2017.

After the tornado, Beaty Swamps ceased to exist. The only landmark that alludes to the former community is Beaty Swamp Road, which intersects Highway 111, 8.7 miles north of Livingston, 12 miles south of Byrdstown.

In 1993, meteorologist Tom Grazulis, who has written extensively about  tornadoes and is head of the Tornado Project, a company that gathers, compiles, and makes tornado information available to tornado and severe weather enthusiasts, the meteorological community and emergency management officials, noted that the Beaty Swamps tornado tracked northeastward for twenty miles, from near Livingston to near Byrdstown. However, in 2006, Mark Rose, a meteorologist with the National Weather Service at Old Hickory, Tennessee wrote that the twenty-mile tornado track asserted by Grazulis, does not appear possible, as the eleven mile path given by the Livingston Enterprise would have carried the tornado very close to Byrdstown. A twenty-mile track would have put the storm into Kentucky before lifting. Thus, Rose asserts the Beaty Swamps tornado tracked northeastward for eleven-miles, not twenty.

The day before the Beaty Swamps tornado, an F4 tornado swept through southern Kentucky, from southwest of Tompkinsville to northeast of Russell Springs. 36 people were killed, 18 in Monroe County, 14 in Russell County and two near Columbia from an F2 categorized tornado.

After May 10th, the next deadly tornado in the region was the outbreak on April 3, 1974.