As I writer, I know that no one is going to promote my writings more than me. There is a lot of work to building up your own product. Fred Thrasher understood that concept. In a Commonwealth Journal interview following his retirement in 2014, he attributed his aptitude for self-promotion and the marketing skills he had learned as an artist to his father, Jack. "He would drive his old pickup truck filled with firewood downtown," Fred recalled. "He kept this old banjo behind the seat and [to draw a crowd] he would start picking and singing bluegrass music. After a couple of tunes, he would say 'I've got the best firewood in town; you can cut it with a pocketknife.'" Before long, Jack would have the entire truck load sold after playing a few more tunes.

Fred, like a lot of people here, grew up poor. When he was old enough to work, he did whatever it took to help his family get by, from helping his dad cut wood to shining shoes. Even as an adult he worked at several different jobs, things like operating a service station and selling insurance. While he was successful in what he did, nothing would compare to the success he found after leaving the insurance business in 1977 to become one of Kentucky's most renowned and respected artists.

Fred really didn't work in a 'real job' setting after 1977, because painting was something he passionately loved doing, They say it's not really a job if you love doing it, and Fred loved doing it. Don't get me wrong, he hustled every step of his way to the top. The most fascinating part of his story is that Fred was self-taught.

When did it all began? According to Fred, he developed an obsession for his craft after being inspired to draw and paint by his fourth grade teacher, and while he had the desire and inspiration, he also had a topic. Growing up in a modest environment, he said, had provided him memories for which his paintings are famous. Success came quick after Fred went full-time doing what he loved. His first print, the one of the old Clinton County High School building,sold well. Today, it is one of his most sought-after prints. 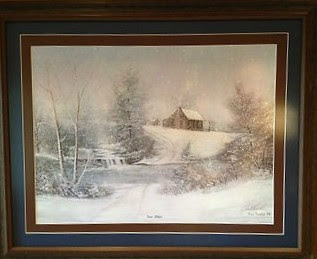 Fred's most popular print, Snowflakes, was released in 1988. In what seems like hundreds of prints later, some of his other popular prints that come to my mind include The Country Doctor, The Good Harvest, Footprints in the Snow, Mill Springs Mill, and The Crossing of the Cumberland, a scene depicting the old Cumberland Ferry Company crossing the Cumberland River with a stage coach carrying the U.S. Mail. While it is hard for me to pick a favorite Fred Thrasher print, because they are all so wonderful, I am partial to one, the Albany Drive-in Theatre print, known as "The Last Picture Show," because I grew up there. Fred's last commercial print, released in 2014, was "Family Heritage," which features a serene snow-blanketed farm landscape. It was part of a series that he had collaborated on with his son, Dennis, and his grandson, Colby, who each contributed to the original painting.

The story of how Fred Thrasher began his career as an artist inspired me to want to be a writer, and it was his son, Danny, who inspired me to want to keep on writing. Danny was Fred's oldest son, who passed away in 2008. We were classmates. Saddened after hearing about his illness got me to thinking about some of the things we had done growing up. The day he, our friend, Mike Beaty, and myself decided to leave the school ground for lunch and got caught inspired me to write about it in a story I titled,An RC Cola and a Moonpie. You can read about it on my blog. Danny read the story before he died. His family related how it made him smile and laugh. I thought, if I can give him one happy moment, perhaps I can do the same for others, and that's why I do what I do.

Our whole community here was happy that Fred Thrasher enjoyed the success he did during his 37 years as a professional. He sure earned that. His paintings are everywhere. Thankfully, his prints will still be sold and bought. Fred taught and encouraged many in his family to follow in his footsteps, and many have, so hopefully his legacy will live on through them. I think it will.

Fred Thrasher enjoyed remarkable success during his 37 years as a professional. His paintings are everywhere. Thankfully, all is not lost. His prints will still be sold and bought. He taught and encouraged many in his family to follow in his footsteps, and many have, so his legacy will live on through them. Watch this page for updates. 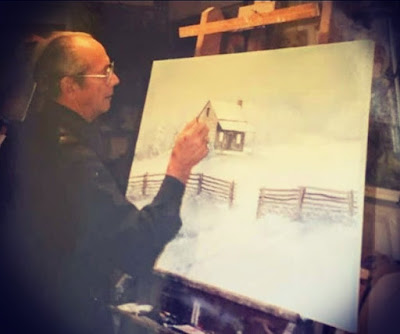