Under the Influence of Vinyl Records

Music has been a huge part of my life for as long as I can remember. My dad was a singer and a musician and I was heavily influenced by his profession, which was two-fold: the music he performed and what he mainly did for a living, which was being a disc jockey on our family-owned radio station. Because of that medium, dad was always bringing home extra copies of 45 r.p.m. records from the radio station. I loved them all, no matter what genre.

I don't remember the first record I ever played on the record player in my bedroom, but I wish I could. I do remember the records by the Beatles, Elton John, Ray Charles Little Richard, Jerry Lee Lewis and so many others. I especially wore out records by the Beatles and Ray Charles, mostly the latter. I taught myself how to play seventh chords and inverted chords by listening to "What'd I Say" by Ray Charles and "Let it Be," by the Fab Four. I wore out two rock and roll albums; "Psychotic Reaction," a 1966 album by Count Five, a garage band from California, and "Progressions," a 1967 release by The Five Americans, who were based in Texas. That one is my all-time favorite album. I not only loved the music I listened to, I also loved dissecting the songs; picking out the musical instruments that were being played, and listening to the vocals. That is where I learned to sing harmony. 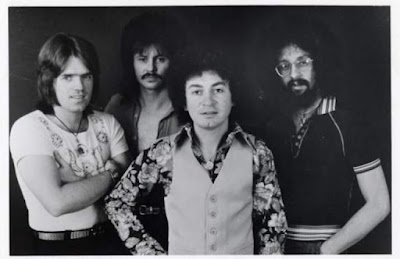 There was one instrument in particular that I would always listen for. It was in the fall of 1970, or possibly a bit later, when dad brought home a 45 rpm record that would change my life, and set me on a course that i still follow to this day. Side A of that record by Jerry Corbetta and Sugarloaf was called "Green Eyed Lady," (#3 in 1970) and the reason it impacted me so was the organ solo that Corbetta played in the middle of the song.

I was almost 11-years-old when dad brought Jerry Corbetta's record home. Thirty eight years later, in 2008, I had the opportunity to meet Corbetta backstage at a concert by his Classic Rock All-Stars group, which consisted of Corbetta on piano and Mike Pinera of Blues Image and Iron Butterfly on guitar. He wrote Ride, Captain, Ride," one of the biggest pop Rick songs ever. On bass guitar was Dennis Noda, formerly of Cannibal and the Headhunters, and on drums was the great Peter Rivera from the Motown Records group, Rare Earth.

When I heard they were going to be in the area, I knew it was Tim to meet my hero, and that is what I did. When the big moment came backstage, I shook his hand and said, "Nice to meet you. You changed my life." We talked for several minutes before I asked for his autograph. It was a big moment for me, and it all began with that 45 r.p.m. record.
Later on, we spoke to each other via email, and I was able to tell him the story of how he inspired me to want to be a piano player/musician. He responded by saying, "I grew up in a house of music. We had a piano and an organ. I would listen to the TV and play along with the music that I heard there. I loved music from the time I was 3 years old. I was 6 years old when I saw Elvis on the television .Something clicked inside me. I asked my father to buy me a piano and get me piano lessons, and he did both. I often think about the time I saw Elvis and how he inspired me to be a musician."

Over the years, I have had many great moments during my musical journey. I was Motown legend Percy Sledge's organ player for one night back in the 90's, but my biggest thrill, by far, was the night I met my inspiration, Jerry Corbetta.

Singer-songwriter, keyboardist, organist, and record producer, Jerry Corbetta died on Sept. 16, 2016 in the city where he was born, Denver, Colorado. Besides "Green Eyed Lady," Sugarloaf also had success with “Don’t Call Us, We’ll Call You” (#9 in 1974). Today, you can still find both songs being played in classic rock formats on radio and other mediums. Other than his groups, Sugarloaf and Classic Rock All-Stars , Corbetta also toured for nearly five years with Frankie Valli and the four seasons as the “fifth season,” nicknamed “Guido” by Frankie Valli.