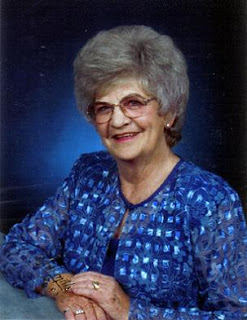 "She always fought
for the underdog," said my aunt.

But, as I reflected
back on the years I had known Mae Hoover, which was just my entire life, I thought how true, except so many
times I saw HER in
that underdog role.

"She was an underdog fighting for the underdog."
Destiny called in 1966, when Mae, and her late husband Welby, walked that glory road, away from the comfort and security they had found in my town, to deliver FM radio to an awaiting community of underdogs, and thus began a media dynasty that is as strong today as it was when it began 42 years ago.

Mae and Welby immediately took on leadership roles in civic and community affairs. They began the popular Lakefest celebration, as well as starting a Food for Needy drive, which helps feed more than 300 families each year at Christmas.

Mae served Welby's term as State Representative when he died before taking office. She walked boldly and triumphantly in his shoes during those days along that glory road. She was President of the Kentucky Federation of Republican Woman, and a delegate to the 1992 Republican National Convention in New Orleans. She was inducted into the Russell County Chamber of Commerce Hall of Fame and the Russell County Jaycees Hall of Fame, and was named Woman of the Year by the Business and Professional Women. 'Woman of the Century' would have been more appropriate.

Mae faced many challenges along that glory road, either as the underdog or for the underdog. But, she taught her children to serve others, and she has beautiful grandchildren that are going through their lives with their feet well-rooted on a foundation she helped build.

Last Friday, Mae's walk along the glory road ended as she was carried to Heaven by angels. Her days as an underdog for the underdog were fulfilled, and the headline read, SHE WON!

Outside of my own mother, Mae Hoover is the strongest woman I have ever known. Her life story challenges me to serve others, and I trust it will challenge you to do the same.

Click here to go to the WJRS/WJKY website, where you can read and learn more about the life of Mae Hoover


A Note: It is my belief that the part of that glory road that took Mae and Welby from my town to theirs so many years ago, should be called Hoover Highway.