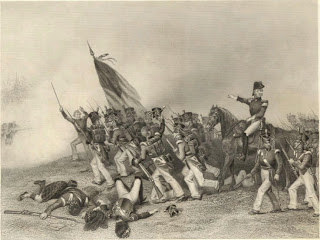 Samuel Wood came to America by way of England in 1755. Though only eighteen, he soon enlisted in the Virginia Militia, a company commanded by Col. George Washington, and was with Braddock when he met defeat at Ft. Duquesne in the French and Indian War. During the Revolutionary War, Samuel Wood did his part to aid his adopted country in its fight for freedom.

His son, William, who was born on June 13, 1773 near the Great Falls of the Potomac River in Loudon County, Virginia, was seven years old when the family moved across the mountains into western North Carolina and settled along Little Limestone Creek, in an area later known as Washington County, Tennessee. When he turned 18, William also joined the State Militia and fought in the American Revolutionary War. In 1791, he obtained the rank of Lieutenant.

Four years later, the 24-year-old Lt. Wood was the third settler to arrive at Stockton Valley, taking up 200 acres on Lick Branch of Spring Creek. At Stockton Valley, William would wear many hats. For instance, he surveyed virtually all of the land of the earliest settlers. Later, Surveyor Wood served as Sheriff and Justice of the Peace. In 1808, Sheriff Wood was elected as State Representative to the Kentucky Legislature from the 38th District, and five years later, State Representative Wood was elected State Senator. He went on to serve a total of 24 years in state government.

Senator Wood was promoted to the rank of Captain of a company of mounted volunteer riflemen in Governor Shelby's campaign to Canada during the War of 1812. The rank of Brevet Major was bestowed to Captain Wood during the advance through Ohio as the group of mostly Stockton Valley men rode to join General Harrison's forces in the vicinity of Detroit. He was reportedly present when Tecumseh was killed. From the War of 1812, Major Wood rode on to the Battle of New Orleans.

Major Wood was known as a formidable competitor in a race before the people because of his good practical sense, proverbial honesty and plain blunt manner; and although he made no pretensions to the character of orator, his influence was always felt and appreciated. He was remembered as a man of no mean qualifications, of great moral worth and strict integrity. Amid the frontier hardships and limitations, Major Wood was a man of honor and influence in the growing settlement at Stockton Valley, and quickly assumed a position of leadership. Not only was William Wood a founding member of Clear Fork Baptist Church, but he also served 47 years, until his death, as the church clerk.

Even though he was a man who wore a lot of different hats - Lieutenant, Captain, Major, Surveyor, Sheriff, Justice of the Peace, State Representative, State Senator -I would venture to say the title he was most proud of was Christian. And, the second most title he was probably proud of was - member of the Church of Jesus Christ at Clear Fork Creek, Clear Fork Baptist Church.

William Wood died January 11, 1851, at the age of 78. He and his wife, Elinor Ryan Wood, are buried in the Clear Fork Burying Ground.

As we celebrate america's freedom this Independence Day, I hope you will join me in saluting William Wood, who's entire life was about freedom. He helped fight for it and he helped win it, and then he bravely put that newfound freedom to the test by moving into a strange new world, where one of the first things he did was help establish a Church, which he served faithfully, and freely, the rest of his days.