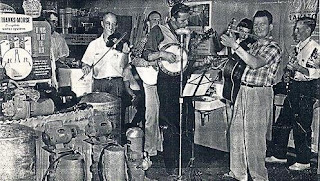 Long-time friend and fellow broadcaster Elmer Goodman was born on this date in 1925. For 50 years he was an entertainer, playing and singing old-time music.

Throughout the 1940's and 50's, Elmer, who sang and played guitar, as well as fiddle, mandolin and banjo, was known as the Cumberland Mountain Boy. He was a regular performer on the famous Renfro Valley Barn Dance for several years.

Not only was Elmer a well-known entertainer, he was also a well-known broadcaster, spending 29 years alone at WANY in Albany. Before that, he worked at a radio station in Mundfordville. In October of 1964, Elmer did the very first live remote broadcast ever in Burkesville, originating from the Parkway Hotel.

He was one of my mentors as I grew up in radio. Throughout his entire life, he stayed true to the music he loved, old-time mountain music, and that was what I admired most about him. He was true to his era, and he served it well. The Cumberland Mountain Boy died on May 11, 1993. I really miss him.