(Photo by Charley Neal)
George Smith was living on Sinking Creek in West Virginia with his wife, Rebecca, and their children, when he answered the call to do his part for independence in the American Revolution. After serving in the Virginia Continental Lines under General George Washington's command, George, who's father Johann Schmidt had migrated from Germany to the west due to religious upheaval, moved his family to Tennessee. By 1793 George and Rebecca, who was an irish immigrant, had 13 children. In 1798, George and two of his sons crossed the mountains into Kentucky, to the new territory that had just opened west of the Green River. The Smith family was the third family to settle in Stockton Valley. On a stream, which would later become known as Smith Creek, George and his sons built a log cabin and prepared for the rest of the family to join them. On April 2, 1802, George Smith and 12 other frontier settlers organized 'the Baptist Church of Jesus Christ on Clear Fork Creek,' known as Clear Fork Baptist Church. But, George took ill in 1803 and died March 20, 1804.

My cousin, author and historian Gary Norris, was thumbing through an unpublished book on local cemeteries recently, when he discovered that there was supposed to have been a cemetery on John Poore's farm at Huntersville. Since he had no knowledge of there being a cemetery on this particular piece of property, Poore agreed to let Gary and his wife, Nancy, have a look around. 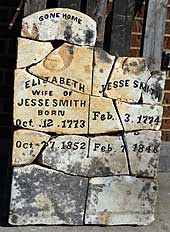 During their search, The Norris' came upon a piece of land that seemed as if it had been disturbed. “It did not look natural,” Gary Norris said. As he was digging, Norris began finding parts of a grave marker made out of marble. Eventually he had pieced together a headstone that marked the gravesite of Jesse and Elizabeth Smith.

I have always been happily consumed by the history of Clear Fork Baptist Church, where I am a member, and when I read Allison Cross' story on the Norris discovery in the local newspaper last week, I had a hunch that I could not wait to act on. The main reason was because the grave site was found near Smith Creek, and I knew that the George Smith family had settled there. I immediately turned to the Church minutes and other sources and right away discovered the answer that I was hoping for. History does not record when Jesse and Elizabeth moved to Stockton Valley, but according to the Church minutes, they both became members of Clear Fork Baptist Church in June of 1812. The Genealogy of George and Rebecca Bowen Smith, revealed that Jesse (James) Smith was the sixth son of George and Rebecca Smith. It is believed that Jesse met and married Elizabeth Daniels of Wilkes County, North Carolina, after the Smith family had moved to Tennessee.

From her earliest meetings as a Church, Clear Fork practiced strict Church discipline. In his book, A Lighthouse In The Wilderness (1972), former pastor Morris Gaskins said, "[Clear Fork] was a guardian of the moral life of every member, and no one escaped her watchful eye." Church minutes shows that, over the years, Jesse Smith was a leader in the Church and very active in her affairs. During his entire Church life, Jesse was consistently called on by the Church to visit fellow members in matters regarding sickness, distress or other difficulties or situations. Several times he was appointed as a delegate to represent Clear Fork at associational meetings. (At the time, Clear Fork was a member of the Stockton Valley Association).

The finding of the grave site is historically significant because of this entry found in the Church minutes from the April 1818 business meeting: 'The Church directs Philip Smith and Jesse Smith (brothers) to get nails to lay the meeting house floor.' Up until that time, the meeting house, which was a log cabin structure built in 1808, had a dirt floor.

Gary Norris said he believes it is possible that the Smiths could have had something to do with the naming of Smith Creek. Since history records that George Smith built his cabin on Smith Creek, and since Jesse and Elizabeth Smith's gravesite was found there, Gary is 100% right. More than likely, the gravesite found by Gary and Nancy is part of 'Smith Cemetery,' where one genealogy study says Jesse and Elizabeth are buried. Even though there were no signs of any more headstones or markers, Gary believes there could be others graves in the area. I hope he is right, and I wish he and Nancy good luck in finding them.