Metropolitan Quartet's "America (My Country 'Tis Of Thee)" being played on my 1918 Edison phonograph.


"Sweet Freedom's Song"
The 1831 premiere of Samuel Smith’s “America (My Country 'Tis Of Thee)" in Boston’s Park Street Church featured a well-drilled children’ choir and the moral pretensions of temperance activists gathered to celebrate a properly righteous fourth of July. For much of the rest of the 19th century the song was employed in a variety of similarly ceremonial occasions. Soon, “America (My Country 'Tis Of Thee)" became an iconic symbol of American identity. Singing “sweet freedom’s song” in one’s politics was a healthy and productive means of making sure that the nation continued to learn how to be more true to its foundational principles. While “America (My Country 'Tis Of Thee)" was a universally popular song, one senses that to those who sang it, democracy was serious business and that participating in political struggle, particularly via song, is part of what it means to be an American.

During the civil war era, “America (My Country 'Tis Of Thee)" became our nations unofficial hymn. In 1893, Jules Levy, who billed himself as the worlds greatest cornet player and who was the first major musician to be extensively recorded, scored a number one hit with his version of “America (My Country 'Tis Of Thee)." A different version by 'March King' John Philip Sousa's band, came in 1905. Sousa would include the song in his collection, "National, Patriotic and Typical Airs of All Countries," which became the standard text for American service bands for the next fifty years. 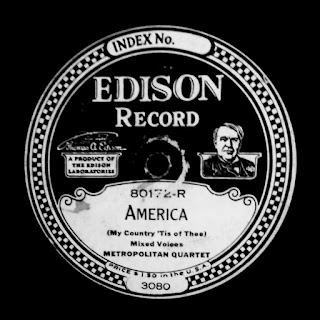 "One of the many patriotic records in my collection."

On June 5, 1914, the Metropolitan Quartet recorded “America (My Country 'Tis Of Thee)" for Edison Records. It was an immensely popular recording by Robert Webb, Peter Collins, James Byrne and Richard Schumm. By the early 20th century, the song had crossed many contexts; secular and sacred, performed and recorded, popular and official, civilian and military, home and stage, to become a staple element of American public life. Other than the American flag, the Star Spangled Banner and the Pledge of Allegiance, one would be hard pressed to imagine any song stirring the kind of emotions and passions brought on by “America (My Country 'Tis Of Thee)." Even when challenged by great soul-stirring contemporary songs like Kate Smith's 1938 version of Irving Berlin's "God Bless America" and Woody Guthrie's "This Land Is Your Land," from 1945, “America (My Country 'Tis Of Thee)" has withstood the test and, to me, will always be America's hymn.


Taken in part from
Sweet Freedoms Song: "America (My Country 'Tis Of Thee) And Democracy In America